Outside of the Big 12/SEC Challenge game, the Kentucky men’s basketball 2019-20 nonconference schedule was completed this morning.

Five additional games have been announced, highlighted by a new multi-team event, the BBN Showcase, along with the finalization of a two-year deal with Georgia Tech.

Kentucky will host four games in the BBN Showcase, starting with Utah Valley on Nov. 18. Mount St. Mary’s will come to town Nov. 22, Lamar on Nov. 24, and UAB on Nov. 29. All four games will be played at Rupp Arena.

Georgia Tech will also visit Rupp Arena on Dec. 14. UK will return to the trip and play the Yellow Jackets Nov. 27, 2020 at State Farm Arena in the Holiday Hoopsgiving. 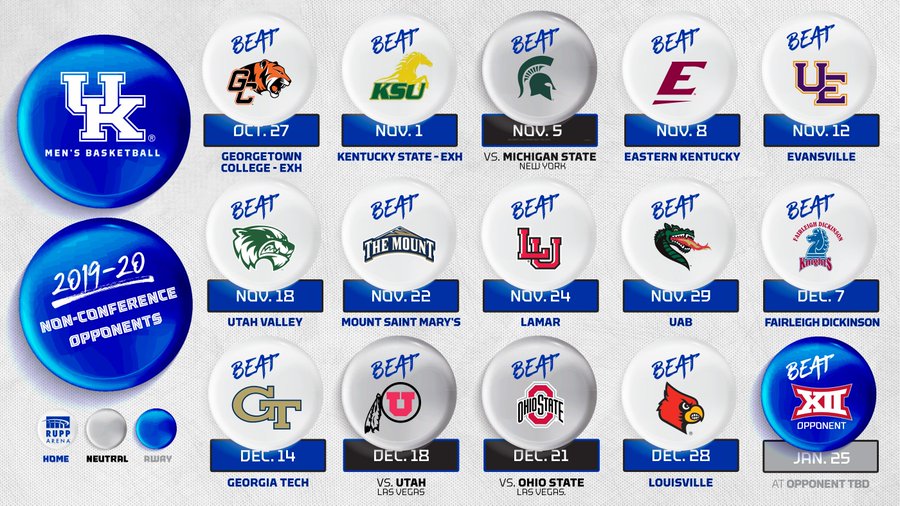 Kentucky’s matchup with Georgia Tech will mark the first meeting since the Yellow Jackets defeated the Wildcats 86-84 on December 9, 2000 in Atlanta. UK leads the all-time series with Georgia Tech, leading 56-15 overall and 30-4 in Lexington.

The five newest additions join UK’s 2019-20 nonconference slate featuring a matchup vs. Michigan State on Nov. 5 in the State Farm Champions Classic in New York, a two-game trip in Las Vegas with games against Utah (Dec. 18) and Ohio State (Dec. 21 as a part of the CBS Sports Classic), and the annual rivalry vs. Louisville on Dec. 28 in Rupp Arena.

Additionally, UK will travel to a to-be-determined Big 12 opponent in the Big 12/SEC Challenge on Jan. 25.

Kentucky’s other previously announced nonconference opponents include Eastern Kentucky (Nov. 8), Evansville (Nov. 12) and Fairleigh Dickinson (Dec. 7). All three of those games will be in Rupp Arena.