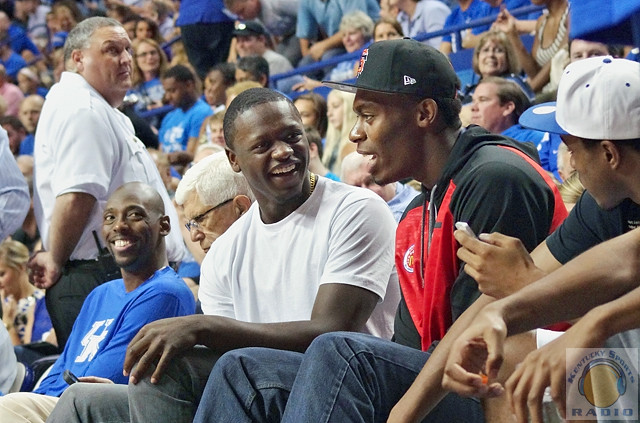 ESPN’s College Basketball preview rolls on, with Eammon Brennan giving us his top ten teams with the most to prove this season. Considering all the hype and expectations surrounding UK’s freshman class, it shouldn’t be a surprise that they’re at the top:

1. Kentucky: There may be a lonely faction out there in the Internet hinterlands who would assume this argument is about John Calipari. Sorry, but no: Calipari has nothing to prove. Yeah, Robert Morris in the NIT, I know, I know, but come on: We’re not even two full years removed from Kentucky’s national title. Remember that? When Calipari got the top two picks in the NBA draft to happily settle for the fourth- and fifth-highest percentage of their team’s shots en route to a 38-2 championship season? You remember that, right? Clearly, Calipari can mesh a class of hyper-talented freshmen with a mix of almost-equally-talented talented returners and win a national title, which is the be-all goal of Kentucky’s 2013-14 campaign. That exact thing just happened!

No, this designation is about Kentucky’s players. Forget Anthony Davis and Michael Kidd-Gilchrist; forget John Wall and DeMarcus Cousins; forget Derrick Rose. Calipari has had a lot of crazy recruiting classes in his career, but none of them have come close to this kind of hype. In March, less than 15 hours after the Wildcats’ embarrassing loss to Robert Morris, Julius Randle committed to Kentucky. A few hours later, ESPN.com recruiting guru Dave Telep wrote that Calipari’s class was the best ever — better even than Michigan’s Fab Five, “the standard bearer for recruiting classes.”

So, yeah, Randle and his classmates — No. 5 ranked Andrew Harrison, No. 7-ranked Dakari Johnson, No. 8-ranked James Young, No. 9-ranked Aaron Harrison, and No. 25-ranked Marcus Lee — have something to prove. That goes double for disappointing sophomore holdovers Alex Poythress and Willie Cauley-Stein. The ceiling here is unfathomable — like, undefeated-season-unfathomable — and it’s almost impossible to envision Calipari presiding over another disaster. Not with this talent. But it is incumbent upon a very confident, cocksure group to come together, to sublimate their individual desires for the good of the team – all of that boring, cliche stuff. The inverse of “best recruiting class ever” is “most disappointing recruiting class ever,” and that’s a legacy no one wants to leave behind.

From what I’ve seen from this group so far, I don’t think they’ll have any problem living up to the hype: