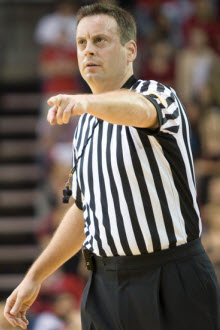 Doug Sirmons was out of line. Even the South Carolina fans around me feel bad for John Calipari and Kentucky after Calipari was tossed two minutes into the game at the hands of Sirmons. Sirmons sprinted all the way across the court to give Calipari his first technical, then quickly gave him a second and sent him back to the locker room. Those two have never been on good terms, and Sirmons took their hatred for one another to the next level today.

What Doug Sirmons did today is absolutely embarrassing to college officiating. He has a short fuse and coaches for years have complained.

The rest of the internet went even further:

Doug Sirmons is trash. I'm dedicating my next shit to him

Doug Sirmons is an embarrassment to the NCAA and his family

Doug Sirmons is the kind of guy that kicks puppies

Doug Sirmons sits when he pees

Sirmons was trending nationally on Twitter, which is never a good thing if you’re an official.