College basketball has been incredibly weird this season.

We’ve seen more top ten and top 25 losses in the history of the sport, with blue blood programs Kentucky, Duke, North Carolina, and Kansas combining for 26 losses on the year. Just last weekend, eight top 25 teams lost to unranked or lower-ranked opponents, including three in the top five and six of the top ten.

As a whole, however, college basketball is shattering records, in a good way.

Ken Pomeroy of the Athletic broke down the latest trends of college basketball, and the numbers are mind-boggling. We are seeing an all-time high in free-throw percentage, three-point attempts, two-point percentage, among many other categories.

All of the great shooting has led to teams making a collective 51.0 percent (effective FG) of their attempts, which would break the all-time record of 50.5 set last season.

While these numbers are all positive and show the actual product is improving, the most shocking statistic involves total free throw attempts.

Officials have been the center of controversy, and watching some Kentucky games have been like watching free throw contests, but we’ve actually seen the fewest number of free throws this season since 1974.

The most dramatic change is in the number of free throws being shot. I haven’t heard any discussion of this, but fouls are noticeably down. Like, way down. There have been 18.3 fouls per game compared to 18.9 last season and 19.4 two seasons ago. In 2014, there were 19.2 fouls per game. The resulting free throws that season helped bump up efficiency to a level we won’t reach this season despite much better shooting.

Along the same lines, teams have shot an average of 19.5 free throws per game compared to 22.3 in 2014. This season will have the fewest free throws since 1974, when there were 18.9 attempts per game.

The visual showing the difference is wild. 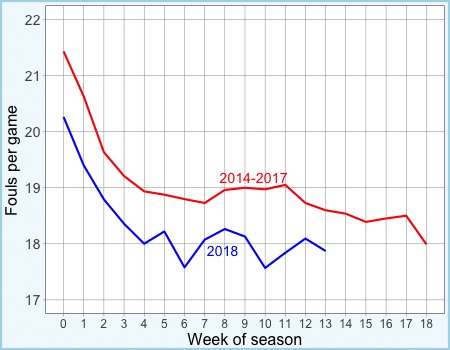 So where do the Wildcats come into play on this?

Right now, Kentucky’s effective field goal percentage comes out to 50.79%, which is right around the national average. They’re currently shooting 47% total from the field, 51% from two, and 33% from three. Again, right on line with the rest of college basketball.

They are also shooting 69% from the free-throw line on 623 total attempts. UK players have committed 477 total fouls, good for 131st-most in the entire nation and an average of 19 fouls per contest, less than one above the national average.

Kentucky opponents, however, are shooting 68% from the free throw line and have committed 508 total fouls. They’re shooting 41% from the field, 29% from three, and have an EFG% of 47.11%, proving the Cats are impressing on the defensive side of the ball.

All in all, despite this being a “down” year for Kentucky basketball, we’re right on line with the rest of college basketball.

According to the numbers, your Wildcats are actually contributing to a historically great basketball season.

To read KenPom’s entire article breaking down the latest trend of college basketball, head on over here.

17 Comments for Does Kentucky follow the latest trend of college basketball?