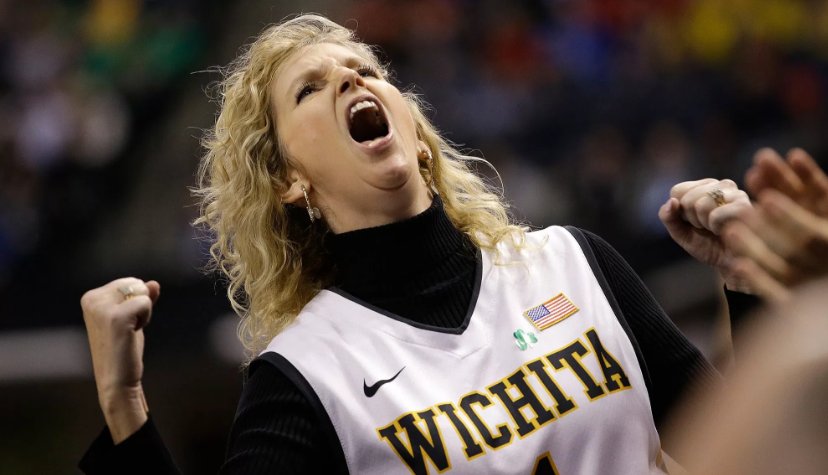 Yesterday was quite the day, huh?

We started out with Michigan’s massive upset over Louisville, “escorting” the Cardinals out of the Tournament in the Round of 32. Kentucky followed it up with a nail biter against Wichita State to move onto the Sweet 16, and the world rejoiced on Sunday night when the Crying Luke Kennard’s of Duke University fell to the almighty SEC. If it weren’t for a few questionable late calls and Mike Anderson crumbling under pressure, Arkansas would have taken down North Carolina to eliminate all ACC teams.

March Madness was unbelievable yesterday, but the big story came from the stands in Kentucky’s matchup against the Shockers.

Gregg Marshall’s wife, Lynn, was unbelievably intoxicated during the game, flailing around in the stands and cursing at players and coaches. She made a fool of herself, and let it known for the world to see. According to WTVQ’s Kennedy Hardman, Lynn Marshall’s daughter apologized for her mother after the game and said “she’s just drunk.”

Mrs. Marshall was approached by security multiple times throughout the game, and was eventually asked to leave immediately following the game. Reports say security told those in attendance, “We have to be delicate because it’s the coach’s wife,” explaining why she was not kicked out long before things got crazy.

As we all know, Drew Franklin didn’t leave the scene without footage, and the NCAA was not too happy about it.

Drew was asked to leave the arena unless he deleted the video with the NCAA looking over his shoulders. It was temporarily taken down, but after realizing he did absolutely nothing wrong, the video was put back up on the site.

The NCAA’s argument is that everything recorded inside the arena is owned by CBS Sports during the Tournament, though we all know that’s hogwash. Their goal was to stop the fire from spreading, but instead, just brought attention to themselves and made the situation worse. This morning, this story was published on Mike and Mike, Good Morning America, Yahoo!, and other national outlets. Inside Edition even picked up the story for tonight.

To make matters worse, NCAA media relations director David Worlock came out and accused Drew of lying, saying no one from the NCAA contacted him about deleting the video. Worlock said if someone asked Drew to take the video down, it was a staff member for the Indiana Pacers, not anyone from his team. Yeah, because the freaking Indiana Pacers care about recording someone in the stands during a college basketball game and the “intellectual property of CBS,” right? Sure.

Matt Jones came out firing this morning, calling out Worlock for blatantly lying to the media, saying he was called personally by the media relations director to take the video down.

While this story is spreading at a ridiculous rate and Drew’s phone is ringing off the hook for interview requests, the NCAA has been the center of criticism. Not only are there several unanswered scandals in their back pocket, but the selection committee’s atrocious mis-seedings and in-game officiating has been brought to light as of late, and this story just might have been the straw that broke the camel’s back.

Right now, Louisville still has yet to receive punishment by the NCAA for the Katina Powell scandal. UofL used underaged prostitutes to recruit players to attend their school, many of which played for the 2013 National Championship team. How is this even in question right now? Recruiting (and signing) players with the help of impermissible benefits equals ineligible players. Ineligible players equals vacated games/season and the banner coming down. THERE SHOULD BE NO GREY AREA WITH THIS. They were given their notice of allegations in October and followed up with their own response in January. Like we have all been doing since October of 2015 when the allegations were released, we must wait. It’s all a formality, but what statement does yesterday’s events make to the public? The NCAA will attempt to grab a reporter out of his chair in the media room immediately following a basketball game over a video, but UofL’s stripper allegations released two years ago and zero punishment has been handed down by the NCAA?

Take a look down the road in Chapel Hill, North Carolina, where over two decades of academic fraud have yet to be punished by the NCAA. Several former UNC “student”-athletes have come out and said they never attended classes and that their selected major was fraudulent. There is substantial evidence of falsified grades and zero academic integrity, meaning countless cases of athlete ineligibility. The “student-first” motto the NCAA has supposedly established from the start has been in jeopardy for twenty years, but there seems to be no rush. National media has swept these massive events under the rug, and the NCAA has followed suit. Instead, attacking the “little” people is justified, or in David Worlock’s case, an outright lie.

When you look at the Kansas Jayhawks right now, the entire basketball program is one disgusting development after another. Rape charges have been filed on campus, and several current Jayhawks, including superstar Josh Jackson, are considered to be witnesses to the event. Carlton Bragg (aka “I’m committing to the University of Kentucky…. err… Kansas”) was arrested on drug paraphernalia charges back in December, and also had battery charges (later dropped) called on him as well. Jackson has also recently been accused of threatening to beat a Kansas women’s basketball player, where the victim claims the freshman guard told her he was “going to kill her.” Jackson was charged with criminal damage of $3100 of damage to the woman’s car. According to a report, guard Lagerald Vick “may have hit a female student two years ago,” and the university office recommended probation.

Is the media discussing this? Not at all. In fact, the spotlight is on how dominant Jackson has been in the tournament and how he has solidified his status as a top-three draft pick. He’s an athletic freak of nature, but the media isn’t touching any off-court issues with a ten-foot pole.

Is Bill Self under scrutiny? Not at all. In fact, when asked by local media about the incidents, Self described them as “major distractions” for the team with the season well underway.

Is this being investigated by the NCAA for punishment? Nah, they’re too busy saving face with Gregg Marshall’s wife and calling Drew a liar.

I get it, everyone is innocent until proven guilty, but absolutely no one is discussing this matter. No one. The NCAA has their priorities entirely screwed up.

How fun was it to see all of America hound the NCAA last weekend when the seeding was announced? Every year, someone is upset. This year, however, their agenda was so blatantly obvious it sparked an uproar of negativity. Sure, let’s put Duke in a region with just one legitimate title contender, ensuring a cake walk to (at the very least) the Elite Eight. Somehow, some way even they managed to screw it up and lose to SEC juggernaut South Carolina, despite Villanova gift-wrapping the Devils a Final Four spot with a cute little bow following their loss to (under-seeded) Wisconsin.

Wichita State could have been a four or five-seed, a ten was absolutely ridiculous. Two top-20 Big 10 teams in Michigan and Wisconsin were listed as seven and nine-seeds, (not) respectively. Vanderbilt had no business being a nine. Michigan State as a 14-loss nine? Please. Just go down the list, the vast majority were wrong.

I would complain about the South region having three title contenders and Kentucky’s path to the Final Four being extremely difficult, but it happens every year. I’d be wasting my breath. For the first time in a while, the rest of the country seemed to be just as outspoken as UK fans when it came to how truly awful the seedings and matchups were, and the relatively boring first round of games proved that.

When you dive into the actual games, officiating is absolutely costing teams from wins, even just this past weekend. Officiating has been a major problem all year long, and coaches across America have been outspoken about the matter. This late in the year, team’s seasons are ending because referees deem it necessary to make the games about themselves. Maybe if the NCAA actually focused on getting their on-court product corrected, it’d be more understandable when they make stupid decisions like the one they made yesterday.

Congratulations, NCAA. The story you so desperately tried to cover up is now spreading like wildfire, and you’re looking even worse than you did before.

17 Comments for Congratulations, NCAA. You played yourself. (Again.)