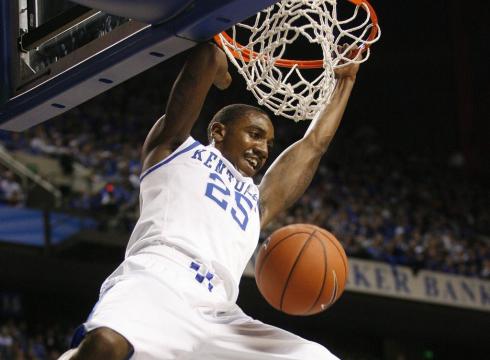 I think there has never been a more crucial NBA decision in the Calipari era than the one the Harrison twins will be making.  If they leave, UK will have just 3 scholarship guards next season and only Dominique Hawkins will have any experience.  If they return, suddenly the Cats are quite deep at the guard spot and likely find themselves back in the Top 10.  I am not sure if there has been another decision (or 2 in this case) as crucial for the next year’s team more than this one.  At least not one that was realistic.  Certainly an Anthony Davis or John Wall leaving had a greater impact, but those guys were never any risk of staying.  Here would be my Top 5 for crucial decisions under Calipari:

1. Marquis Teague (LEFT)
-At the time, there is no way that Teague’s was the most crucial, but as it turned out it became that way.  If we could have seen the struggles Ryan Harrow would have in 2012-13, there would have been a greater sense of urgency to get Teague back to Lexington.  I continue to argue that Marquis Teague would have made the 2013 team an NCAA participant for sure and a potential Top 15 team.  It would have taken a significant amount of pressure off of Harrow and likely would have made Teague some serious cash.  As it stands now, Teague is bouncing around the league, Harrow left, and that team made the NIT.

2. Doron Lamb (RETURNED)
-Lamb was never much risk to leave Kentucky after his freshman year, but he had such an impact in his sophomore year that goes unappreciated.  Lamb was the 2nd leading scorer on a national championship team.  That puts him in the same category as Antoine Walker, Nazr Mohammed, Rick Robey, Johnny Cox, Ralph Beard, and Alex Groza.  He was the leading scorer in the title game and gave UK a consistent shooter from the outside, something that cost them a title in 2010.  Plus, he gave UK that much added experience in the starting lineup and a consistent performer at the 2-guard.

3. Terrence Jones (RETURNED)
-Much in the same mold as Lamb, Jones coming back was less expected than Lamb.  He certainly had the stats to leave after 1 year, but coming back gave Kentucky one of the best frontcourts in school history.  While the 2012 team was awesome, you can argue that if they lose either Lamb or Jones, that might not have been the case.  Once both came back, that team was nearly unstoppable.

4. Daniel Orton (LEFT)
-Yes, Josh Harrellson became a solid contributor for the Cats the year after Orton left, but once Enes Kanter was ruled ineligible, UK needed Orton to be that big offensive guy in the post.  Terrence Jones would go on to fill some of that void, but that 2011 UK team actually needed Orton, even though he wasn’t a fan favorite.  His departure put a ton of pressure on Jorts, who responded, but a lack of a consistent post scorer did hurt at certain points in the season.

49 Comments for BTI’s Rants and Ramblings: The 5 Most Crucial NBA Decisions of the Cal Era