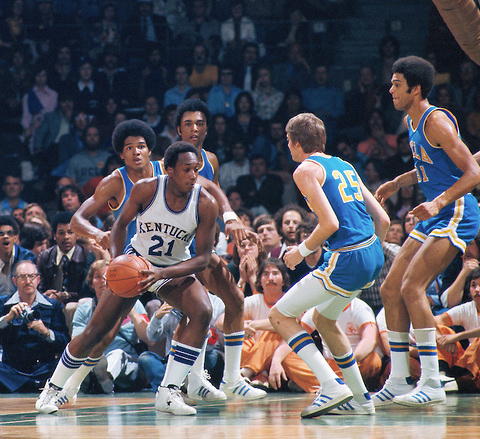 Talk to an older UK fan and they always have interesting feelings when it comes to the 1975 NCAA Championship game.  And really, I have always found that game had a more important factor on UK history than people would like to admit.  First off, just take the overall titles.  If Kentucky had been able to win that game, the overall count would stand at UCLA 10, Kentucky 9.  And with a very likely title this year, UK could have been tied in that category in March.  But also think about what that game meant for the individuals involved.  For John Wooden, it allowed him to go out a winner.  I would tend to think that part of his narrative is constantly mentioned and UK had a chance to damage that.  Sounds a lot different to say Wooden went out a runner-up over a champion.  How about Joe. B Hall?  He would have had 2 titles in his career, instead of just the 1.  Pitino, Smith, and Calipari haven’t been able to win a 2nd title, so Hall could have separated himself from everybody but Rupp.

And then there is Kevin Grevey.  His stats would merit him in consideration for one of the 2 or 3 best UK players of all-time.  But he doesn’t have a title.  Neither does Issel, but his stats were so astronomical that it didn’t matter.  Grevey needed that title.  And if he had won it, I think he would have been in the same breath as Goose Givens.

But what people often talk about is simply how UK was the better team that night.  There might have been some questionable foul calls in favor of the Bruins, in hopes of giving Wooden his last title.  I don’t know.  But I actually found footage of that 1975 championship game for your viewing pleasure.

7 Comments for BTI’s Rants and Ramblings: Relive the Most Famous UK-UCLA Meeting