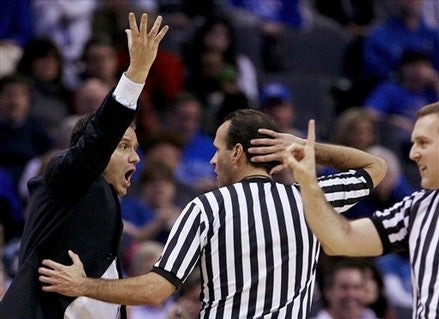 I’ll be honest, I can’t stand the “blame the refs” fan and I know many of you agree with me on that.  That fan thinks every call that goes for your team was the right one and every one that goes against is the wrong one.  And above all else, it’s probably a conspiracy to screw your team.  Certainly, we have a sliver of fans that act that way in UK world, but every fanbase does.  Look at UL fans.  They continue, to this day, to claim the officials screwed them out of the game against UK in the Sweet 16.  It’s quite annoying because it ignores that refs have about a 20% impact in my opinion on a game in the long run.

We saw bad officiating rear it’s ugly head a couple nights ago in the NBA.  Oklahoma City was the beneficiary of a very bad out of bounds call that would have given the ball back to the Clippers.  Instead, OKC kept the ball and went on to win the game.  Fans cried outrage and even Doc Rivers claimed the refs screwed them out of the game.  If the correct call had been made, it is likely the Clippers would have won.  But blaming the refs alone ignores the multitude of mistakes a team makes when losing a game.  Just follow along to what happened in that NBA game for example:

1. With 49 seconds remaining, Chris Paul hits a jumper that put the Clippers up 7.  Kevin Durant then hits a 3-pointer 6 seconds later to cut the lead to 4.  (Refs have no impact there)

2. Jamal Crawford misses layup with 22 seconds left and Thunder get rebound.  (Refs have no impact there)

3. Kevin Durant makes layup with 17 seconds left to cut the lead to 2.  The Clippers have now allowed the NBA’s leading scorer to hit an relatively open 3-pointer and an uncontested layup on 2 straight possessions.  The refs did not impact either of those decisions.

4. Chris Paul has ball stolen from him.  The refs didn’t turn it over, nor did they miss any fouls that caused the turnover.

5. Ball is knocked out of bounds off Thunder player and refs get call wrong.  Thunder retain ball.  At this point the Clippers are up 2.  If they are given the ball, do they win the game?  Probably, assuming they hit their free throws.  But nonetheless, the bad call does not give points to the Thunder.  If the Clippers do what they are supposed to, they still are likely to win the game.  But…..

6. Chris Paul then fouls Russell Westbrook on a 3-pointer.  Westbrook hits all 3 shots to give Thunder the lead.  Some would argue the Thunder should not have had the ball in the first place.  True.  But the refs bad decision earlier did not then force Paul to make a horrendous foul.  The more unusual play of the 2 is not the missed call, but Paul’s foul.  The refs are not the blame for the foul.

7. Paul then turns it over in the lane and the game ends.  Maybe I’m wrong, but the refs did not steal the ball from Paul.

Seven different plays, 6 of which the refs had no impact in.  And in the 7th play (#6 on the list), while a refs call gave the Thunder an extra possession, that doesn’t excuse Chris Paul making a horrible decision and fouling a 3-point shooter.  Did the refs play an impact on the game?  OF COURSE THEY DID.  But they are not the sole reason for the loss, and they are nowhere near the main reason for the loss.  But for fans it is easier to just blame someone other than your team.

The point is this: refs are an easy target and sometimes they deserve to be.  The quality of officiating has gone down over the last 5-10 years at both the college and pro level.  But just because that is the case doesn’t mean that officials decide who wins and loses games.  They don’t.  Their decisions are not always right, but the actions of the players still are the main impact on a game.  Officials are rarely the cause for a guy to shoot 1-10 or why a team allows an opponent to score 45 points.

I think officials have around a 20% impact on a game.  Does putting a guy into foul trouble impact a game?  Sure.  But that also assumes that each foul the official called was wrong.  Normally, most fouls officials call are correct.  Timing is a consideration on many of these calls too.  But at the end of the day, a player has 4 times the impact on a game than an official in most cases.  And I always wish that the sliver of fans who think refs have it out for them could see the bigger picture of things and recognize that sometimes it their guy and not the guy in the stripped shirt that makes the most impact.

What say you?  Do refs actually have a direct effect on the outcome of the game or do they just play a small role in what truly goes on?  I say 20% impact.  Too much or too little?

60 Comments for BTI’s Rants and Ramblings: How much impact do you think refs have?