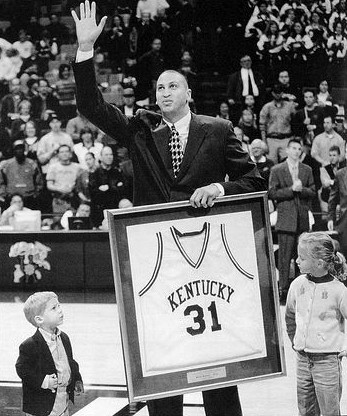 It has now been 13 years since a player saw his jersey retired, Kenny Walker in 2001.  Now, it seems incredibly obvious that the next person who should go into the rafters would be Tony Delk.  Delk certainly had more than enough career, was a 4-year player, a national title winner, all-american, and much more.  And Delk was inducted into the UK Athletics Hall of Fame in September of 2008.  Now, I don’t know if the Hall of Fame doesn’t vote on a potential jersey retirement until 5 years after that induction or just 10 years after that guy leaves the school, but either way Delk has crossed both barriers by a couple years and then some.  Why Delk hasn’t either received the 75-percent necessary for jersey retirement or hasn’t even put up for a vote is beyond me, but nonetheless that is not the point of this post.

I just wonder if the current process for getting into the rafters is right at Kentucky at all.  I would never argue that names should be pulled down.  That would be insensitive and silly, especially considering many of the guys there have passed away now.  But if many of the guys from the 1940’s and 1950’s who have only average stats at best and mostly were just on roster when the team won a title, why does it seem some of the better players in modern times can’t get up there?  Why is there not a system for automatic inclusion in the rafters?

I hate to give North Carolina props for anything, but I think they have a great system for honoring their jersey.  Players must meet certain criteria or they just are not included.  Those criteria are:

There is no discussion.  To win those honors and awards above, you must be an elite player or at least a key player on a title team.  There is no grey area.  There should really be no debate.  Kentucky has never institued any rules until recently, whereas before guys like Layton Rouse, #185 on the career scoring list and never an all-american, have been honored.  And I don’t entirely hate the concept of the rules currently in place.  Except, if a guy like Tony Delk has not been inducted while being eligible for at least 2 years, then clearly the rules are not working properly.

Currently there are 37 players who have honored jerseys at Rupp Arena.  Keep them up there.  Great.  But if we use the UNC standards from here on out, here would be the players who are not there currently who would be until those standards:

I am sure everybody will have squabbles with players who are not in that group right there, but there is no OBVIOUS people missing from that list.  None.  Davis and Wall have clearly been Calipari’s most impactful, best players.  Delk, Prince, and Bogans all have the stats and success to back up there inclusion.  Sheppard and Mercer probably would leave some disputing their inclusion, but a good argument can be made for both.  And Brannum and Parker very few of us could remember or judge.  But the point is there is nobody that slam dunk without a question should be in that list that isn’t.

The last point to make is on GRADUATION.  I don’t want to place people into categories, but usually it is the older generation of UK fans who feel players should play 4 years and graduate to be considered for inclusion.  Let me give you this quick little story for those of you who feel that way.  Did you know that CM Newton pulled down the jersey of Sean Woods in the late 1990’s because Woods had not graduated from Kentucky.  After Woods did graduate in 2000, the jersey was put back up.  But I find that story to be DISGUSTING.  Why Woods didn’t graduate in 1992 I don’t know.  And frankly I don’t care.  Because his jersey was retired for his performance ON THE COURT.  Doesn’t mean that Woods should have been allowed to murder people off the court, but use some freaking common sense.  A player’s behavior off the court should mean something, not his graduation.  Mitch Barnhart commented that he knows of no such rule currently that a player must have graduated to have his jersey retired.  So thank god for that.

So what do you think?  Are you surprised that Tony Delk is not up there and do you think the standards to put a person in the rafters are too subjective and become more objective as I argue?

67 Comments for BTI’s Rants and Ramblings: Do we Retire Jerseys the Right Way?