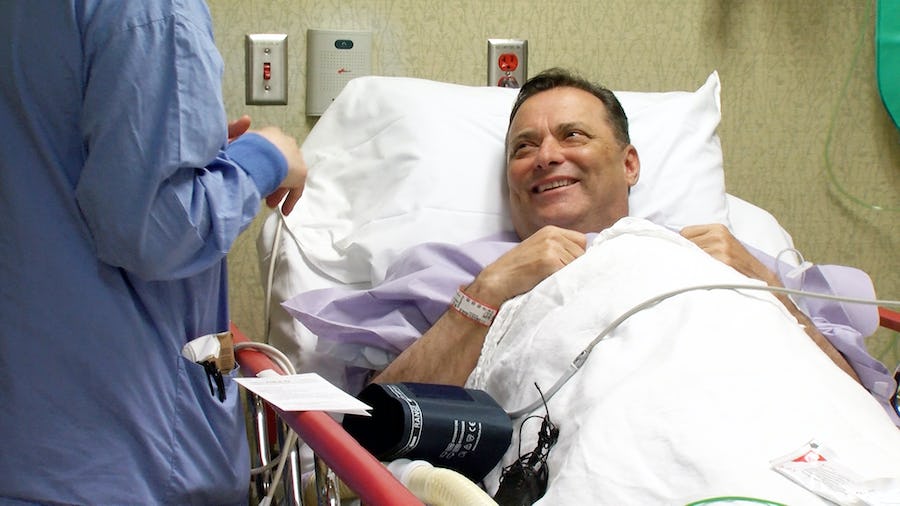 Today, Gillispie is reportedly up and moving, even going on an afternoon walk with the gracious donor.

Coach Gillispie and I out for our afternoon walk. So happy to see him doing so well. Giving God the glory. pic.twitter.com/JKD6NfziTi

The former Kentucky coach had been experiencing major health issues over the last year or so, and was hospitalized in January for kidney failure due to chronic high blood pressure.

Downey reached out to Gillispie and finally met with him in San Antonio at the Final Four.. After running tests, it was determined Downey’s kidney was a match, and the procedure was approved.

“I was just sitting on the floor cleaning and I took a break,” Downey told the Charleston Gazette-Mail back in March. “I came across a story in the Dallas Morning News about Coach Gillispie. I just immediately felt I was supposed to help.”

Just a month later, the 90-minute procedure was completed, and both Gillispie and Downey are “doing great.”

The former Kentucky coach then opened up about the process and how thankful he is for Downey’s selfless act.

“I said, ‘I don’t really know how we got to this point, with you being here, other than God’s grace,” Gillispie said. “He delivered my angel in my biggest time of need in my life. It’s just unbelievable.’”

Gillispie is expected to be discharged from the Mayo Clinic on Friday, but will stay in Rochester, MN for a couple weeks to make sure his new kidney continues to function well.

7 Comments for Billy Gillispie says “things are going fantastic” following kidney transplant. “(God) delivered my angel in my biggest time of need in my life.”