It went unnoticed by many in the second half snoozefest over Duquesne, but Briscoe only played three minutes after halftime.  There’s a mystery as to exactly what happened.  At first it was described as a pulled muscle, then a foot injury, then a fan behind the bench said they saw him sitting on an icepack (he hurt his butt?).  Regardless, it’s no big deal and Briscoe will be back ready to go Wednesday against Cleveland State.

Even though he didn’t repeat the Calipari cliche verbatim, he definitely meant it.  As he wrapped up his press conference, he asked if there were still fans waiting to hear his radio interview with Tom Leach on the court at Rupp Arena.  He couldn’t believe they were still there on a Sunday night.

Nobody knows their Kentucky stats quite like Cat Scratches contributor Corey Price.  The following two stats show just how similar Fox is to John Wall.

4. UK Leads in 4th Down Conversions

You probably forgot the Cats converted two fourth downs against Austin Peay.  Now 9-of-11 this season, the Cats 81.1% fourth down conversion rate is the best in the SEC.

Former UK defensive end Lloyd Tubman did not make the stat sheet in his return to Commonwealth Stadium, but he did take the time to pose for a picture with his teammates from the class of 2014.  The Twitter caption: “Got mad love for theses boys,It was different being across from em on Saturday. But we all good doe.” 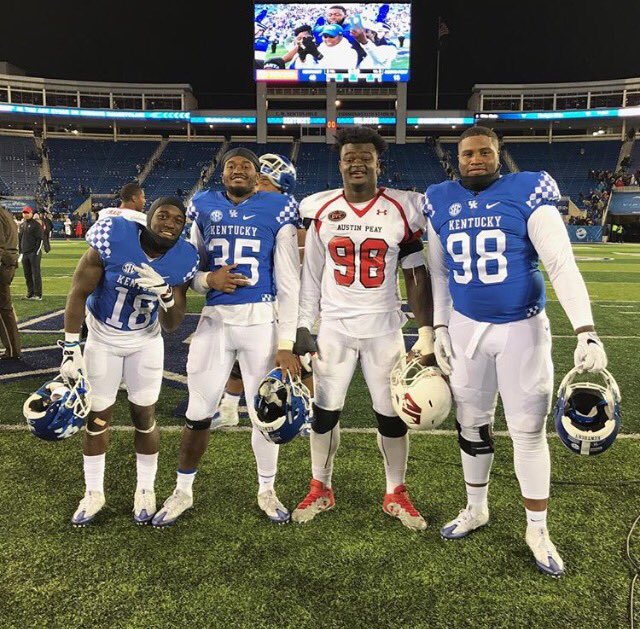 6. Toth Selected to the Senior Bowl

After the UK center concludes his Kentucky career at a bowl game, Jon Toth will attend the Senior Bowl in Mobile, Alabama.  Overlooked by most of the talking heads, Toth will prove to the NFL scouts he’s worth a large paycheck.

The Packers have not been good at football this year.  How this happened is a bit of a mystery, but Cobb still found a way to make a big play on Sunday Night Football.

Not going down that easy…

In other news on NFL Cats, Bud Dupree was taken off injured reserve for yesterday’s game against the Browns, although he only played a snap or two in his 2016 debut.

8. Can Trae Young and Quade Green Play Together?

That’s the question everyone’s been asking since Green announced his commitment to Kentucky Saturday night.  In theory, they can, but it might not work in practice.

I can imagine a world were the pass first distributor (Green) runs the offense alongside an elusive sharp-shooter on the wing (Young).  I don’t have to imagine because the two played together this summer on the the USA’s U18 team.  Their stats from the tournament in Chile reveal a few things:

Neither were stars, but Green was more efficient.  Playing together is a possibility, but not likely.

For the first time in school history, Kentucky received a national seed.  At No. 16, they earned a bye and the right to host a second round matchup.  Facing perennial power Creighton, the Cats fell behind 2-0 early.  The quickly responded with a goal, but were forced to play the last 20 minutes with only 10 men, eventually falling to the Bluejays 3-2.

The Cats’ first loss of the year at The Bell, it was a sudden end to a great season.  The program is in good hands with Johan Cedergren, who’s taken UK to the NCAA Tournament three consecutive years, only missing it once in his five years as a head coach.  Hopefully it’s the first of many postseason games to come at The Bell.

After taking a tough 79-69 loss in the elevation against Colorado, Matthew Mitchell’s team fell to No. 20 in the AP Poll.

7 Comments for Before Thanksgiving Leftovers, 10 Leftovers from the Weekend