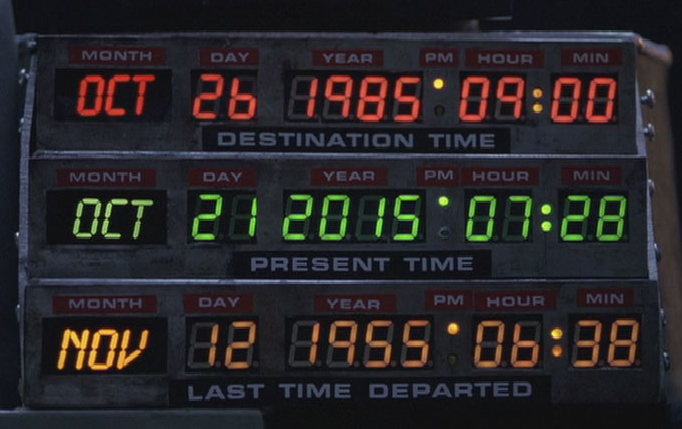 After years of people jumping the gun on Facebook, “Back to the Future” Day is finally here. For those of you under 30, here’s an explanation. In the movie “Back to the Future Part II,” Marty McFly and Doc Brown travel from 1985 to October 21, 2015 to save his future children.

Looking back, it’s pretty funny how 2015 was portrayed, but maybe they weren’t that far off. There aren’t any flying cars yet, but Lexus introduced a prototype of a hoverboard, which McFly famous rides in the movie; Google Glass, even though it flopped, is like video glasses; we’ve totally got video chatting; and Nike is reportedly working on high-tech sneakers with motors to tie the shoe laces. Hell, even the Chicago Cubs have a shot of winning the World Series, even if it’s a long one.

So, to celebrate the day, turn your pockets inside out and grab a Pepsi Perfect. Who knows, tomorrow’s paper might even look like this: 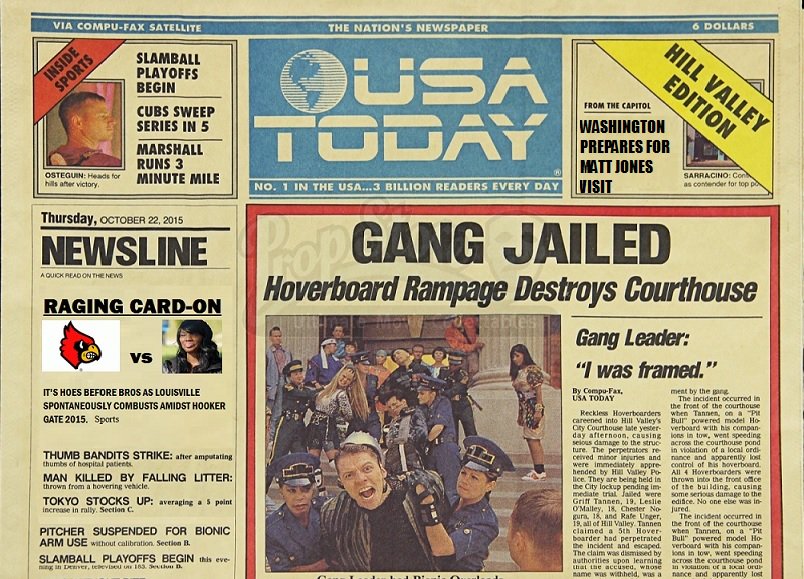 What will happen with the Louisville scandal today?

Yesterday was quite the day for our feathered friends down the road, with five former players and recruits confirming the stripper/prostitution allegations surrounding the program. The story was the talk of the sports world, with Pitino digging in his heels and refusing to step down despite several national and local writers calling for his head. I listened to part of the meltdown on Louisville sports radio and aside from the truly delusional callers/hosts, found it all a little bit sad. I only know about two rational Louisville fans, and as the news about the scandal rolled along the bottom of ESPN’s ticker all day, I actually felt bad for them. And then I’d listen to the next delusional caller. 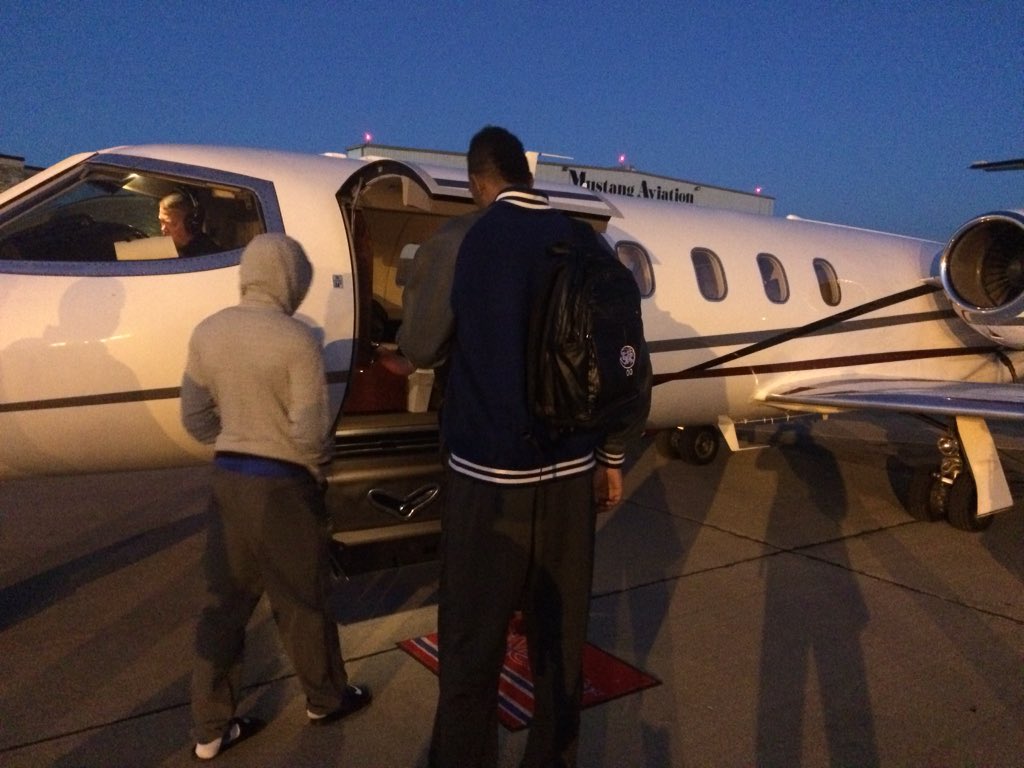 Ulis and Lee boarding the plane to Charlotte this morning (@KentuckyMBB)

John Calipari, Tyler Ulis, and Marcus Lee will rep the Cats in Charlotte today for the annual SEC Tipoff, aka the dwarf brother to the league’s four-day football media circus. Players and coaches from each of the 14 schools will address the media throughout the day, and parts of it will be televised on the SEC Network. Don’t worry, I’ll watch so you don’t have to.

We’ll hear from Mark Stoops on the SEC Teleconference

Unfortunately, the Mississippi State game has taken a backseat to the Louisville shenanigans, but we’ll do our best to rectify that today. Stoops will talk to reporters on the SEC Teleconference after lunch. Last night, Shannon Dawson told reporters that despite three bad plays, the offense turned in their best performance of the season vs. Auburn and that the team’s using cowbells in practice to prepare for a hostile road environment. We talked about this on the podcast last night, but I think this is Kentucky’s toughest game left on the schedule. Patrick Towles actually seemed excited about going on the road when he talked to reporters last night, so let’s hope they’ve sharpened the chip on their shoulder after letting one slip away Thursday night.

The KSR Podcast drops this afternoon

Once we got past the pain of the Auburn loss and some technical delays, it was a blast. We learned about Freddie’s ancestors, why we have to call him “Panther,” and why he loves Starkville. We also talked about football. I think. Look for that on the site this afternoon.

There’s going to be a “Gilmore Girls” revival on Netflix

I only got into “Gilmore Girls” about a year ago when I needed something to watch on the elliptical, but I quickly became a fan of the verbose, overly caffeinated mother-daughter duo of Lorelai and Rory Gilmore. You can imagine my delight when I found out that series creator Amy Sherman-Palladino is working with Netflix to air four 90-minute episodes/mini-movies featuring most of the major cast members. Just the thought of it makes me want to drink coffee all day.

Ryan and Drew take over KSR

Matt’s in DC for the rest of the week to learn what it takes to be a congressional candidate. That leaves Ryan Lemond and Drew Franklin to run the radio show. You know what they says…when the cat’s away, the mice will play…