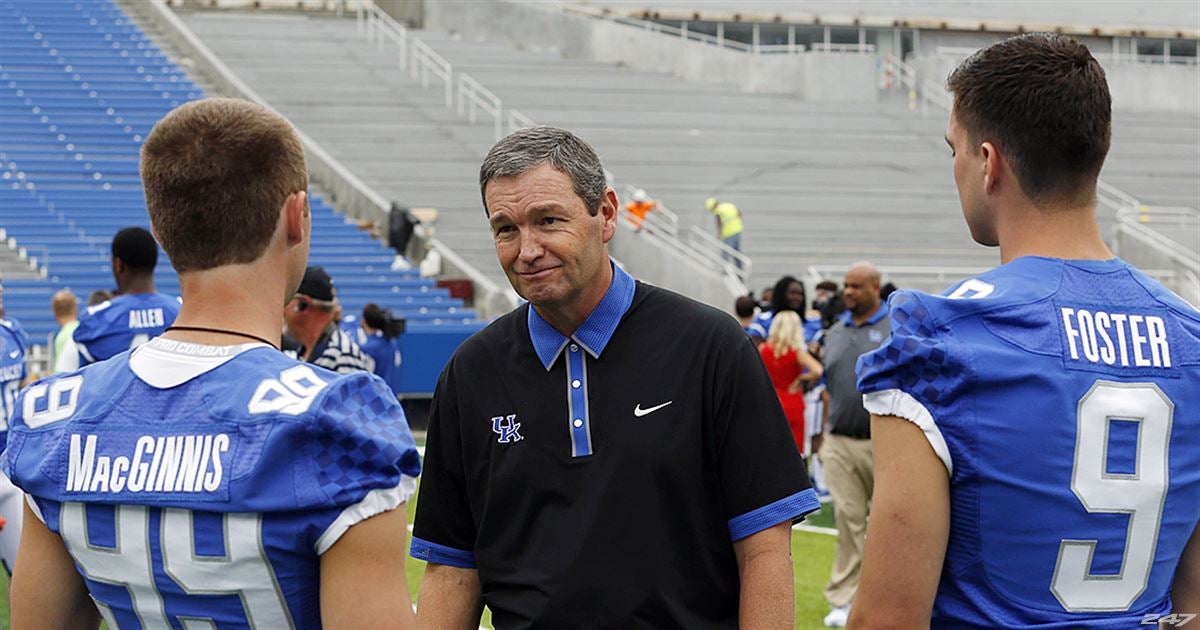 UK Athletics Director Mitch Barnhart came on KSR this morning to recap some of the big happenings in the UK sports world in recent months, including the announcement of a new baseball stadium, the football team’s big turnaround, and new renovations to the Joe Craft Center. Here are some notes from his appearance, including an awkward conversation about the influx of checkerboard on the new uniforms.

1. The new baseball stadium has been a long time coming

Mitch said UK has wanted a new baseball stadium since 2007, and now, the plan is finally in place to build one, with construction scheduled to begin in February.

For more details on the $49 million stadium, click here.

A few weeks ago, it looked like Mark Stoops’ time at Kentucky might be coming to an end, but somehow, UK turned the season around, which Mitch said is a testament to Mark Stoops’ resiliency.

“I think if you look at the person that Mark is, he always talks about not flinching, and I will say this, the guy never flinches. He goes right on and he battles. And I think that’s become a little bit of the hallmark of this group,” Barnhart said. “I think this team has some resiliency and you’ve seen from an insider’s perspective, you shut your doors and say, okay, this is the family we fight with and they’ve done a remarkable job of staying together and people are seeing that.”

Barnhart said quarterback Stephen Johnson’s calm demeanor and steadiness has also rubbed off on the squad.

“You’re playing with a young man at quarterback who is brand new to our program, he’s been here all of seven, eight months, whatever. His first start came two or three games into his career at Kentucky, that’s a lot to ask of a guy, to walk into that system in this league to do that, and Stephen’s done a remarkable job of learning and still battling. I tell you, he’s a pretty even keeled guy, and the team has taken on a little bit of that personality. Pretty even keeled, make a mistake, go back out to the next play and we found our way through. The resiliency has been great. Internally, they fight for each other and they battle for each other.”

4. Barnhart admitted he was worried when Drew Barker went down

When Drew Barker went down with a back injury, most of us thought it spelled doom for Kentucky’s season. Like the rest of us, Barnhart admitted he panicked.

“No question, when Drew went down, you sit and you’re saying, okay this is the guy we thought would be the guy we would run with and he’s in trouble health-wise,” Mitch said. “Yeah, for sure, your thoughts go to well, how will this play out. To the coaches’ credit and the team’s credit, their resiliency and taking care of one another, they moved forward step by step.”

Barnhart again pointed to Stephen Johnson’s leadership as one of the reasons Kentucky’s been able to turn it around.

5. The updates to the Joe Craft Center aren’t just for basketball

Earlier this week, Barnhart announced UK will make some renovations to the Joe Craft Center, similar to those at the new football training facility. Today, Barnhart said it’s important to keep the Craft Center, which houses men’s and women’s basketball, current.

“We definitely know that basketball’s been the marquee program for Kentucky for years. We’ve got to make sure we’re current with that and that we’re honoring that the right way.”

Mitch said the renovations will also include the addition of a “wellness center” with a training table to help feed the student athletes on the north side of campus.

Kentucky’s lease at Rupp Arena runs through the 2018 season, but Mitch said the plan is to extend that lease, especially in light of the recent renovations.

“I don’t see anything changing,” Mitch said. “I expect [that lease] to extend. We’re thankful for the renovations, the new scoreboard, the new ribbon boards, the sound system, all of that is really good.”

It’s amazing how much the recent renovations have changed the atmosphere at Rupp.

Matt ended the interview by asking why the athletic department has gone all in on the checkerboard motif, from the new court at Rupp to the widely panned new basketball uniforms. Mitch got a little defensive about the checkerboard, which honors Secretariat, and honestly, the whole exchange was a little awkward.

“Well, it’s not ‘Checkerboard U,’ and you’re right, your opinion doesn’t matter that much to me, Matt,” he joked. “I’m just kidding. I appreciate your input.”

Mitch then explained how the department is trying to align itself with Secretariat, to which Matt interrupted and pointed out that Secretariat wasn’t even born in Kentucky (he was born in Virginia).

“I understand. Matt, here you go again. We like what he did, he ran a great race, he had a great career. So we align ourselves, there are people here locally we work with very closely with, so we’ve got that. He was one of the greatest that ever ran. So we’ve aligned ourselves with some silks that are sort of cool. Our players love it, our athletes like it and they like it on their uniforms.”

Matt interrupted again to point out that the players have gone on record saying they DON’T like the checkerboard on the new uniforms.

Check out the podcast to fully appreciate the exchange. Mitch comes on at the halfway mark:

32 Comments for 7 Notes from Mitch Barnhart’s interview on KSR, including why UK’s all in on the checkerboard