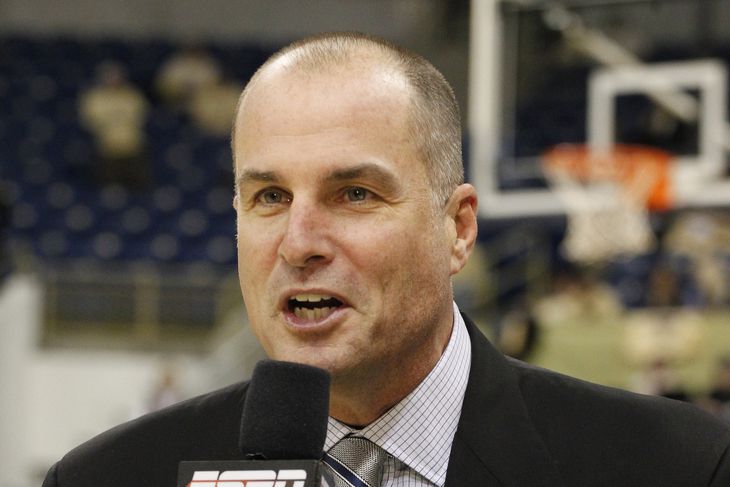 Do you want more from Jay Bilas’ teleconference? Either way, you’re about to get it. Here are the other things the Bilastrator had to say about Kentucky this afternoon.

1. Last year’s backcourt was great, but this year’s guards are “more explosive”

Tyler Ulis, Jamal Murray, and Isaiah Briscoe will go down as one of the greatest backcourts in Kentucky Basketball history, but according to Bilas, this year’s trio of De’Aaron Fox, Malik Monk, and Briscoe may be even better.

“Kentucky’s deeper and their guards are a little bit more explosive [this season]. Early on in the season last year, I thought Kentucky was really going to be able to attack the basket and it turns out they were not as capable of doing that, in one measure because they weren’t a great shooting team. Obviously, Jamal Murray could shoot it and Tyler Ulis could make an open shot but it wasn’t – Isaiah Briscoe, you could lay off of him and you’re not going to be able to lay off of this year’s team quite as much and I think they’re going to be really explosive in transition and I think they’ll be better defensively.”

2. De’Aaron Fox “has a chance to be one of the elite defenders in the country”

“De’Aaron Fox, I think he is a great defender and has a chance to be one of the elite defenders in the country. I think scoring – what did they put up, 160 points yesterday in their exhibition – I don’t think scoring’s going to be a problem. I think the main thing, especially with a young team, is going to be defense. Can they play high-level defense without fouling, can they protect the rim, can they limit opponents to one shot consistently? I think they’re capable of that.”

3. “Outside of Duke, this is the most talented team in the country”

Count Bilas among those that thinks the Blue Devils have more talent than the Cats, but the speed at which that talent matures will dictate what Kentucky is capable of in the postseason.

“This is – outside of Duke – this is the most talented team in the country just from a pure basketball talent. It’s just young talent. Any time you have youth at that level, and Kentucky’s seen it both ways. Kentucky’s seen youth that is ready to go and then youth you have to wait on. I’m not sure where this team shakes out just yet.”

4. Kentucky will be the best team in the SEC “by far”

Bilas said the SEC will be better this year, but Kentucky is “by far” the best team talent-wise. He listed Florida, Texas A&M, and Georgia as potential NCAA Tournament teams, followed by Arkansas, Vandy, and Alabama.

“The SEC is improving, but it’s not quite there yet,” he said. “The other teams in the league have to be able to beat Kentucky to prove to the committee they’re legit.”

5. Bam Adebayo is a beast, but who else will protect the rim?

“Bam Adebayo is one of the hardest playing big guys you’re going to see. He’s a beast as far as going after the ball, his work on the backboards and all that. Outside of that, they’ve got guys who are kind of unproven. Wenyen Gabriel is a really good player. He’s not the same type of player they’ve had in the past that can block three or four shots a game and stuff like that. Then they’ve got guys coming back like Humphries and Wynyard that – they’re going to have to protect the rim, in other words. I don’t know what kind of shot blocking they’re having every day in practice but it’s not the same type of team they had two years ago.”

6. Bilas then repeated one of my favorite analogies for the 2015 team…

“Playing against Kentucky in 2015 was like trying to throw a frisbee through a forest. You’re just going to get batted down. I don’t know that they have that this year, but they’re so talented and they’ve got so many pieces that as long as everyone stays healthy, they’ll throw a lot of bodies at you and ultimately wear you down.”

7. He expects Briscoe to have a big year

“I think it will be really helpful,” Bilas said of Briscoe seeking feedback from the NBA last summer. “Anytime you’re a year older and you’ve been through it, it’s really helpful. It just gives you a sharper focus and a lot of times players make their biggest jump in their careers between their freshman and sophomore years. That’s not always true, but often times that’s true.”

“Isaiah’s only issue last year – he had a really good year. He played really well. Really good defender. He’s one of the best guard rebounders in the country. The only thing he didn’t do was shoot it. And that impacted his game. Early on, people figured out, he’s not going to take these shots and they started laying off him and taking away his drives and clogging everything up for others, kind of daring him to shoot. I don’t think he’ll be doing that quite as much this year. He’s improved in that regard. And leadership’s going to be a big deal for him, but I expect him to have a really good year.”

I sure hope so.