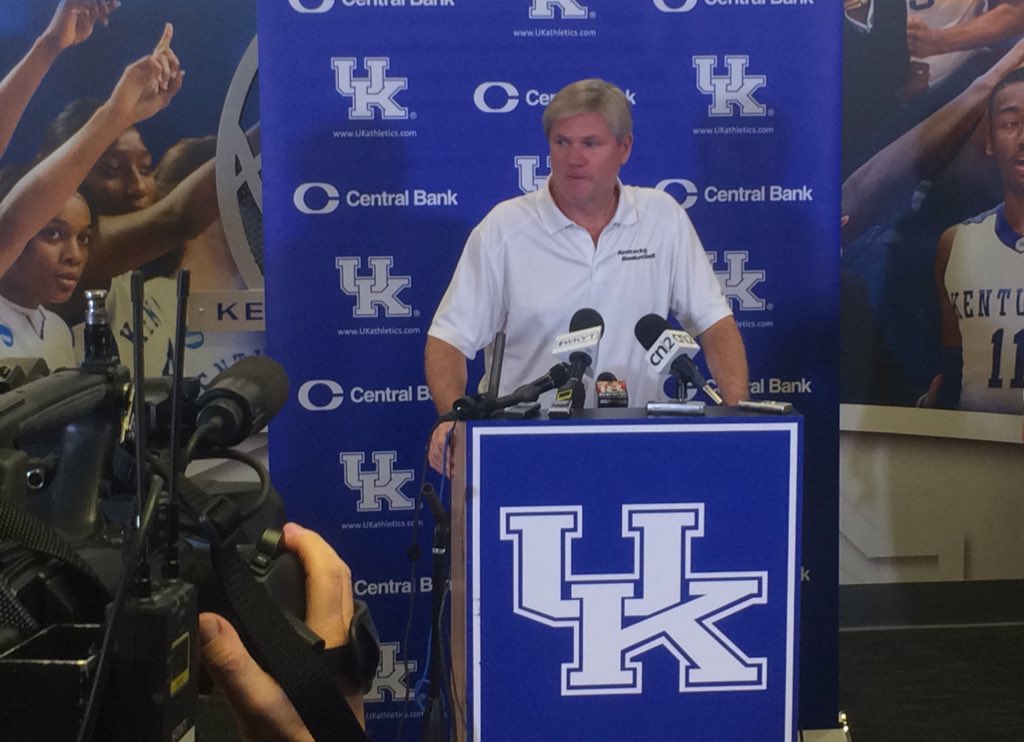 Earlier this afternoon, John Robic addressed the media regarding tomorrow’s game at Arkansas, and while Tyler Ulis’ leadership and Derek Willis’ mindset in practice were my main takeaways, there are some other remarks worth mentioning.

The coaching staff had hoped Hawkins would be able to play in Monday night’s scrimmage, but held him out as a precaution. Hawkins is nursing a high ankle sprain and Robic said that he’s still limited to non-contact drills in practice. That doesn’t sound very promising for his chances of playing tomorrow night.

Robic refused to share which changes Calipari’s made since Saturday

Try as he might, Jerry Tipton couldn’t get Robic to divulge which changes Calipari’s made in practice this week.

John Calipari doesn’t like to linger after road games, so they’ll fly back to Lexington from Fayetteville Thursday night. Robic was thankful for the early tip time, which should have them back at home by midnight before the next round of winter weather comes in on Friday.

“Alex as a freshman. A lot of similarities. From the physical standpoint to just getting through it, and Alex, I think, would tell you the same thing. He’s been a good shoulder for Skal to lean on, because he’s seen it. But you know what, [Skal] is making strides. He’s been good the last two days of practice, and hopefully it’ll carry over again to today.”

Skal said Alex has been “a big help”:

“He’s been here four years so I’ve been fortunate to learn a lot from him. He talks to me whenever I need help. He walks me through things. He’s been a big help,” Skal said. “Encouraging me, telling me to keep my head up, keep working. He’s been through some of the same things his freshman year.”

Jamal Murray is “learning how to play winning basketball”

One thing the staff has been harping on Murray for is going for the easy play instead of the hard one. Robic said Murray’s still “learning how to play winning basketball.”

“There’s no need to panic”

Robic admitted that having four losses by mid-January was “somewhat unusual” for Kentucky since he’s been here, but encouraged fans not to panic.

“We’ve been on such a great run here that when you have a little peaks and valleys and you have a couple of valleys — I believe we’ve only lost four games so far — it’s somewhat unusual around here since we’ve been here, to be in January and have that. There’s no need to panic. This has been a process, and it’s been a process that we’re trying to really get through. It’s still a work in progress, if that makes any sense at all.”

It does, but this is Kentucky. We panic over regular season basketball losses and weather models. It’s what we do.