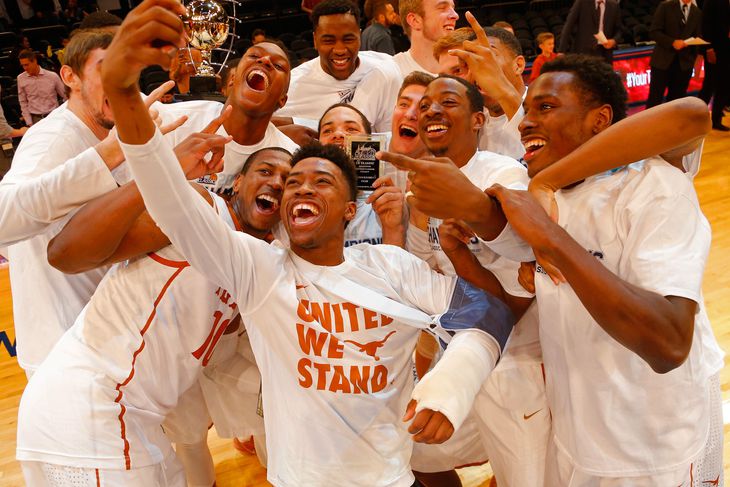 After breezing through the first half of the non-conference schedule, the competition picks up in December, beginning with a home contest against No. 6 Texas in two days. The Longhorns have the size to match up with the Wildcats and they have already proven they can knock off ranked teams on the road this season. Texas defeated defending national champion UConn, on UConn’s home floor, and will look to ride that momentum entering Rupp Arena.

Tonight, as we count down the hours until the matchup of top 10 teams, I would like to share with you 10 things you MUST know about Texas. I honestly can’t believe you lasted so long without this information. It’s vital to your game-watching experience.

Taking on the nation’s best hasn’t produced positive results for Texas, ever. The Longhorns are winless against college basketball’s No. 1 team since the AP poll began in 1949. Seven times they’ve tried to upset the top dog and seven times they have failed. Time to make it eight.

2.) This will be the second meeting between the Wildcats and Longhorns.

The two teams met in Maui in 1993 but that’s the only time they’ve squared up on the basketball court. Kentucky won that one, 86-61, with double figures from Tony Delk, Jared Prickett, Gimel Martinez and Rodney Dent. Prickett had a double-double with 14 and 14.

3.) Texas held its first seven opponents to under 60 points this season.

Rick Barnes is a big believer in good defense and his players are defending well thus far in 2014-15. Opponents have scored an average of 52.5 points per game, good enough for 10th in the country, on a combined 30.8 field goal percentage.

While Texas has been stellar defensively, UK has been better. Kentucky’s D ranks second in the country in points allowed, giving up only 44.6 per game.

4.) The Longhorns rank 11th nationally in blocks per game.

For those of you who missed the Dubstep boat, it’s a genre of electronic dance music that originated in London. ‘Music’ should be taken loosely there because dubstep is really just a lot of noises. It’s usually played at concerts and parties where people are too out of it to know what’s happening, but they get lost in the beat and pass an imaginary ball back and forth while making out with strangers and sweating all over each other.

Turner tweeted, “Judge me,” to anyone who has a problem with his affinity for dubstep. I wonder if he dances like this around campus in Austin:

Confession: I can get down with some dubstep if the mood’s right.

Taylor started the first 38 games of his career at Texas before injuring his wrist against Iowa two weeks ago. He led the Longhorns in assists and minutes, and was second in points and steals last season. He reached double figures in his only three games this year. He will be missed.

7.) Cameron Ridley can swat a basketball.

Now this is a block. Look alive back there…

Dakari Johnson won’t be able to move his weight around in the paint to force his way into position, the way he did in Kentucky’s first seven games. All 285 pounds of Cameron Ridley will make quite an obstacle.

Texas also has a 260-pounder inside in Price Ibeh. Ibeh is from London — I wonder if he listens to dubstep?

9.) Texas is fourth in the country in rebounding.

You see Ridley, so you understand why Texas has owned the glass this year. The Longhorns haul in 44.9 boards per game, less than one rebound better than UK’s 44 even. It will be a battle inside.

Today, Barnes told the story of how he met Coach Cal at Pittsburgh basketball camp in 1978. Cal was playing for Clarion at the time and was a counselor at the camp. Barnes was out of college and coaching one of the teams.

“From that time we’ve been friends,” Barnes said.

6 Comments for 10 Things To Know About The Longhorns