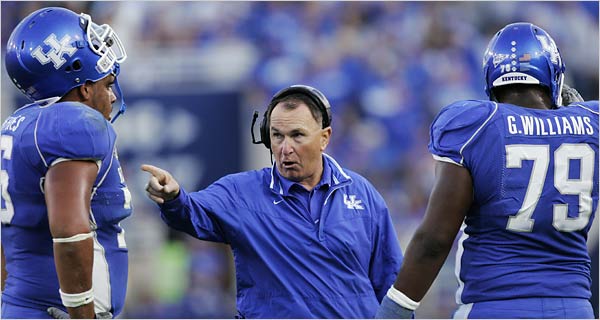 Again, Coach Brooks is getting no love in the media outside of Kentucky. This time, however, the column in question doesn’t outwardly censure Brooks; instead, it lists the coach, in the headline, as one of two coaches in the SEC on the “hottest” seat, along with Phil Fulmer. Oddly, Brooks isn’t mentioned in the actual article, but that may be due to Internet editing or something. I totally made that up; but on the Tennessean’s website, this column is available under two different headlines. Weird, huh?

I admit that I first found this story on EDSBS, and they already pose the question that you’re certainly thinking. How can a coach be on the hot seat if he’s already named his successor? Furthermore, how can a coach that has brought tons of success to a struggling program be fired after one mediocre year? Punishing Brooks because “all of his good players are gone” is crazy. Brooks certainly deserves at least a year to rebuild; however, many people (myself included), expect this team to be just as competitive as the previous two. I think what we have returning is often overlooked by those outside of the state, but that’s to be expected.

Brooks, when listed in the photo gallery as the second-most hot-seated (hmmm…) coach in the conference, is preceded by this header, “It may not be a make or break year, but you have to win a lot of games.” Correct me if I’m wrong (and I know you will), but isn’t that basically the mantra of about 80% of the coaches in America? Winning games is generally pretty important. That said, even a (deep breath…exhale) 4-8 season would not doom Brooks. Here’s what Climer (or his editor) had to say about the ol’ ballcoach:

Let’s face it: Life isn’t fair. Brooks owns back-to-back eight-win seasons and has won consecutive Music City Bowls. He beat eventual national champion LSU last season. Yet the pressure remains. Remember, he appeared out-bound after the ’05 season. With so many personnel losses, you wonder if Brooks can deliver again. He’ll be 67 when the season opens, and age is always an issue unless your name is Paterno or Bowden.

This is all well and good, but as stated earlier, I think Brooks deserves at least a season to rebuild after said personnel losses. Also, there is not nearly as much pressure on the UK coach as, say, the coach at Tennessee. I would even go as far as saying that Brooks is the last guy in the conference to be canned after a bad season. But that won’t happen. Think positive.