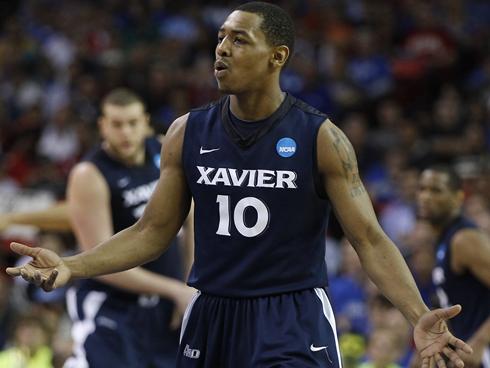 Xavier point guard Mark Lyons was one of the best point guards in America last season, averaging 15 points, three assists, and three rebounds per game for the Musketeers. But thanks to a fallout with the coaching staff following the infamous brawl with Cincinnati, Lyons is looking to transfer for his final season of college basketball.

The Cats have expressed serious interest in the guard, who could be eligible to play next season. Lyons redshirted his freshman year at Xavier and will graduate next month, so he would be considered a graduate student transfer. By NCAA rules, graduate student transfers are allowed to play immediately as long as they enroll in a graduate program that isn’t offered where they completed their undergraduate studies. It’s the same move we saw from Wisconsin star quarterback Russell Wilson last season in college football.

Lyons’ character could be a concern for Kentucky fans — he received a two-game suspension for this role in the brawl — but his game would be a huge addition to next year’s roster. Adding a proven player to compete with Ryan Harrow and provide depth at the point guard position is just what UK needs. Kentucky would once again be a serious contender for the national title if John Calipari can somehow reel Lyons into Lexington.

We’ll definitely be keeping an eye on this one.