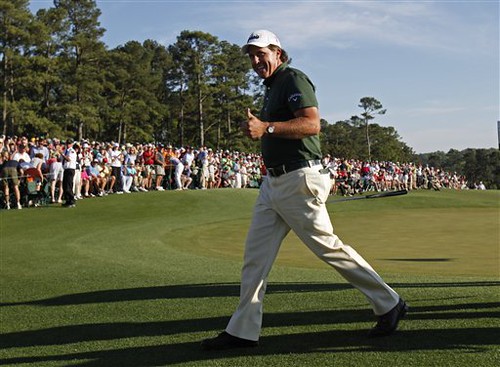 What a great Sunday that wrapped up a great weekend in sports. A beautiful Kentucky day with the Masters on the tube and a Kentucky Ale in your paw is a damn fine way to spend a Sunday in April. Let’s put a cap on the weekend by taking a look back at all the events:

–The Masters. Kenny Perry finished the day in a tie for 26th at one over par for the tournament. UK graduate Steve Flesch fell apart a bit in the final round (he posted a 78) and finished tied for 38th posting a +6 score for the tournament. Of course, the big story was Tiger wilting during the final round and Phil Mickelson surging past Lee Westwood (Born in Nottinghamshire. Really. It is like the mythical place where hobbits are born that steal from the rich and give to the poor) to win his third green jacket. For anyone that knows someone with breast cancer (Phil’s wife and mother were diagnosed with breast cancer over the past year), it was tough not to root for Lefty. It was a touching scene to see Phil leave the 18th green and hug a blubbering Amy. Who would you rather be at this point, Tiger or Phil? Looks to me like Mickelson has the best of both worlds. Not something you would have predicted 5 years ago.

–Softball. When I was at the football scrimmage on Saturday, numerous people stated they had matriculated to Commonwealth from the softball field because it was jam packed. They missed out on a beat down that the Wildcats put on South Carolina. On Sunday, the Cats completed a sweep of the Gamecocks with an 8-0 shutout.

–Baseball. The Wildcats entered a weekend series with against a ranked Alabama team needing a good showing. The Cats have been up and down all season and were coming off a great win over Louisville earlier in the week. The Bat Cats answered the call and took 2 of 3 from the Crimson Tide. Next up is Florida as the Cats look to keep up the great play.

–Men’s Golf. While the Masters were dominating the headlines nationally, UK was holding a regular season ending tournament. As a team, the Cats finished in fifth place. Individually, Wildcat Brian Belden used a 2 under 69 in the second round to power his way to a third place finish. Murray State won the team portion of the tournament by one stroke over Memphis. The SEC Championships begin this week at St. Simons Island, Georgia. That clinches it. All the Johns kids will be playing golf in hopes they make a collegiate team.