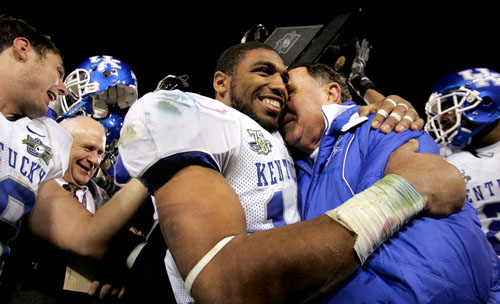 The Kentucky football program earned another badge of honor last night as former Cat Wesley Woodyard was elected as a captain of the Denver Broncos in only his second season – and just a year and a half removed from an NFL draft that saw him go undrafted. Woodyard will serve as the special teams captain for the 2009 season. The good news was tweeted out this morning by Joker Phillips and then seconded by Coach Brooks who, as one familiar with the pro game, wished Woodyard luck on his next contract.

Last season, Woodyard played in all 16 Bronco games, earning starts in six of the final eight and registering 47 tackles. This season, he enters the year as DJ Williams’ back-up at inside linebacker, and has some good company as a Broncos captain. Here are the others: