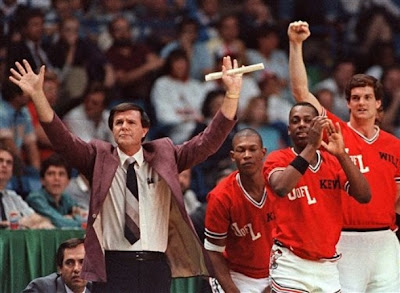 Just when you thought John Calipari couldn’t do anything that showed more testicular fortitude, he finds a way to outdo himself again. After first creating a UK Legends game in Lexington, selling out the arena and bringing in the best collection of NBA talent the state has ever seen, he has taken to a new path. As KSR first reported earlier tonight, Calipari is attempting to have a second UK Legends vs Dominican game, this time at the Yum Center in Louisville. And as part of the festivities, a source tells KSR that Calipari plans on extending an invitation to Denny Crum to be an honorary coach for the event. As you know, two former Cards, Francisco Garcia and Edgar Sosa, will be on the Dominican team and with the game in the Yum Center, having Denny around to get a nice round of applause and teach the young kids some new tricks will be great.

Of course, bringing Denny to the game would have other advantages as well. A level of fury that would come from Tom Jurich, Rick Pitino and the UL fanbase will be virtually unprecedented and the collective seething coming from Cardinal way will make the event even sweeter. Whether Denny coaches or doesnt (his friend Joe B Hall is trying to get him to do it), this much is clear. Calipari is simply better at this type of thing, creating exciting buzz-worthy events/moments that also have the effect of annoying his rivals, than anyone currently in college athletics.

29 Comments for Why Not Add Denny Crum to the Fun?