Wake Forest is a private, coeducational university in the U.S. state of North Carolina, founded in 1834.  It is most famous for the movie Hellraiser 3: Hell On Earth, which took place on the Wake Forest campus.

Surgeon General’s Warning:  Living in Winston-Salem, North Carolina causes lung cancer, heart disease, emphysema, obesity, heart failure, clogged arteries, and may complicate pregnancy.  Winston-Salem, or “Camel City,” is home to the headquarters of R.J. Reynolds Tobacco Company and Krispy Kreme Donuts.  Other than that, it’s not good for much.  Unless you wear Hanes underwear.

– Muggsy Bogues – Shortest player to ever play in the NBA

In 1923, following a win over Duke, the editor of the school newspaper referred to the team as “Demon Deacons,” in recognition of what he called their “devilish” play and fighting spirit. 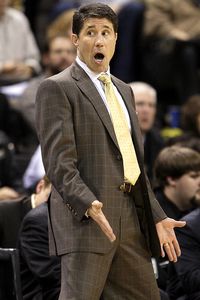 Dino Gaudio is in his third season as head coach and his tenth season overall at Wake Forest.  He had served as an assistant to his predecessor, Skip Prosser, who died suddenly in July 2007.

Ishmael “Ish” Smith is majoring in Religion.  Tomorrow, he has a 40 minute internship under Blue Jesus.

Williams has started all but one game in his career.  He is the Demon Deacons top defender and is one of the best dunkers in the nation.

Aminu descends from Nigerian kings.  His first name, Al-Farouq, means “the chief as arrived”.  I think Aminu means either “but got spanked by Kentucky” or “looks like a cartoon character.”

McFarland has one goal in mind – to get Boogie to punch him.  I’ll settle for an ‘inadvertent’ nose-breaking elbow.  Check out BTI’s piece on McFarland.

Sportsbook.com currently has the spread at -9 and O/U at 142.5.  Remember:  KSR does not condone gambling.  If you believe that you or a loved one have a gambling addiction, please seek immediate help and avoid Matt Jones’ picks of the decade at all costs.