Conference realignment. The carousel has seemingly not stopped for the past few years, and it doesn’t look like it will slow down anytime soon. The most recent move has Notre Dame ditching the Big East to join the ACC in every sport but football, leaving the ACC with fourteen football schools. As of now, ACC league commissioner John Swofford says they’re not recruiting any more schools to join, plus adding one more league would mean fifteen schools and a bit of a football scheduling headache.

However, according to Mark Story of the Herald-Leader, rumors are still circulating that the ACC is looking for one more solid school (probably a Big East seceder) to join and strengthen its conference. Story asks the question that made me reel in disbelief: what if that next school to join the ACC was Kentucky?

Take a second and gag a little. Get it out of your system. I’ll wait.

Story argues that a Kentucky move to the ACC would help us tremendously with our struggling football program. Basically, we can’t win in the SEC. Barring a major program reform, we’re always going to be second fiddle to Alabama, LSU, Georgia, Florida, even Vandy some years. It’s disheartening. Texas A&M was in a similar position in the Big 12, but made the bold move to the SEC in hopes of securing a new football identity. Why shouldn’t Kentucky football get the same opportunity?

As for the basketball purists, you can’t deny the ACC’s traditional strength of conference. A move to the ACC would give Kentucky regular opportunities to play against Duke and UNC, plus increase the conference’s revenue by adding at least two more hugely profitable games that would garner enormous ratings for television and guarantee a College Game Day visit. We’d get to see Duke and UNC in Rupp as well as periodically invade their home courts and those irritating Cameron Crazies. Also, the SEC has been weak for the past couple of years, and a move to the ACC would nip any “yeah, Kentucky has a great conference record, but their conference sucks” arguments in the bud. 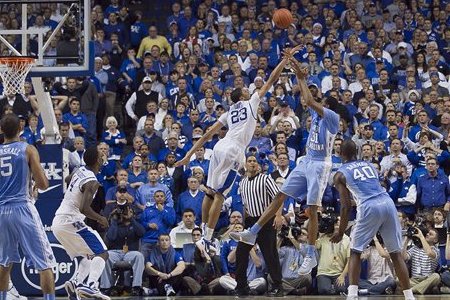 Plus, we’d get to see more of this.

Rationally, it could work. It could even progress our athletic program. After all, the basketball team is well-established enough that we can succeed wherever we go. The football team needs an extra leg up, and a conference shakeup could be just what the doctor ordered. It could even be a way to show the football players and coaching staff that we value them just as much as basketball, if not more, because this move would benefit them the most.

But you know what? The thought just feels icky in my stomach. Kentucky football may struggle, but our tradition is more than just wins and (lots of) losses. It’s about our state’s Southern identity, our hatred for Tennessee and all things orange, and our road trips to the meccas of tailgating culture. It just feels wrong to think about Kentucky being an ACC school.

Luckily, this speculation is all incredibly premature, and good only for “what if” fodder. For now, Kentucky is safe and sound in the SEC, and there’s no reason to think anything otherwise.

36 Comments for What if Kentucky Moved to the ACC?