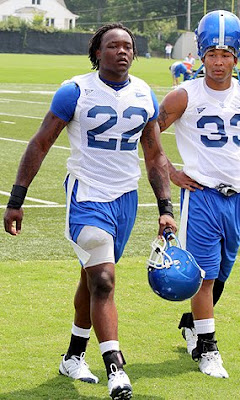 Rashawn Franklin is back from UK’s practice with notes.

Joker Phillips held a brief press conference after Wednesday’s practice. Along with him, Danny Trevathan, Morgan Newton, and defensive coordinator Rick Minter were all available for interview.

-Center Matt Smith (ankle) practiced with the second offense today. Coach Phillips said he looked good but still expects Jake Lakefski to get the start in the middle against Louisville.

-Coach Phillips was more pleased with the overall performance of his players on Wednesday compared to Tuesday. He still thinks the team needs to get sharper at some positions heading into the final practice.

-Wide Receiver Brian Adams (ankle) also practiced today. He came up a little gimpy on one play, Phillips said, but remained in practice and will play on Saturday.

-When asked about the continuity between Larod King and Morgan Newton on the field, Coach Phillips thinks that it more about offensive progression than comfort level. Joker specifically pointed at the first interception that Newton had against WKU as a lack of good progression. He stressed that Newton has to be quicker through progressions and to not force things and use his feet.

-Phillips thought that Newton has looked good in practice this week and looks to put him in situations to use his feet against the Cardinals. He brought up the intensity of Louisville’s blitzes and said that there has to be movement away from it to have success.

-Morgan Newton said that his focus this week in practice was to “just to get better.”

-Newton also talked about Louisville’s defense and said that their blitz packages are “great,” and that their man to man defense is extremely good as well.

-Overall, Newton is pretty optimistic about Saturday’s game against the Cardinals, saying that “If we play our best ball, things should take care of themselves.”

-Inside linebacker Danny Trevathan talked about leadership being the biggest thing he can bring to the Louisville game. He said that both the ‘Cats and Cards have a lot of young players and in a rivalry game one of the biggest things is poise and “wanting it more than the other team.”

-Trevathan also said he thinks the best defense on the field will win the game. When asked about the entire team’s prospects for Saturday he expects the offense to play well and compliment the defense’s intensity.

-Defensive coordinator Rick Minter said that he has been pleased with the play of Ashely Lowery and Eric Dixon and said you can expect to see them both on the field more.

–Mikie Benton has also played himself into a starting role. Phillips said he’s a really smart guy, knows where he has to line up, and will flourish in his role.

-Mister Cobble has been getting a little more playing time in the middle of the ‘Cats defense. In the WKU game, Luke McDermott played about 60% of snaps at the position, and it was almost completely flipped in the Central Michigan game with Cobble getting about 65% of snaps.

-When asked about the nose tackle position Minter said that Cobble had been battling injuries but is getting where he needs to be. He boasted that Cobble is 320, which is one of the reasons he will get more playing time, and that he uses his hands extremely well. He called Cobble getting more snaps than McDermott not more of a demotion of McDermott but more of a promotion for Cobble. Look for Cobble to be more of a staple at the nose tackle position heading into SEC play.