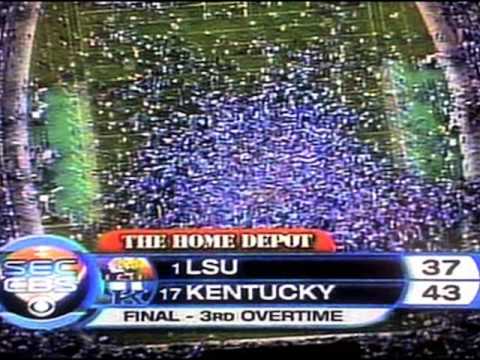 Once upon a time, Marcus McClinton’s “We Believe” mantra led the long moribund Kentucky fan base into a new era of hope. An era in which Kentucky football games became a meaningful event rather than a mere Kentucky sports purgatory awaiting the great reward of another basketball season. That season, and the enthusiasm it inspired, became a turning point for the fan base. Fans who once greeted football season with gallows humor now dared dream of true achievement, and this hope created an infectious atmosphere for big games at Commonwealth. In short, it became fun. Now, some five weeks into Joker Phillips inaugural season at the helm of the Big Blue, I am deeply disheartened and perplexed at the change in temperature of the typical U.K fan. While mingling with fans at the Grove in Oxford after the game Saturday, fielding texts from friends and perusing the message boards, I was truly struck by the disillusionment of many fans. And while I too was disappointed to see the Cats allow the opportunity for a rare conference road victory literally slip through their fingers on Saturday, I am dumbfounded by the premature leap many Cat fans are taking from the bandwagon.

Whether we care to admit it or not, we are essentially where we should be five games into the season. How many of us looked at the schedule in August and believed we would be better than three and two at this point? We have, to this point, won the three games we were favored to win, and lost the two SEC road games in which we were underdogs. So there has been no Gardner Webb moment. Why, then, is there such collective hand-wringing amongst the faithful?

I have heard many complain that the offense is “conservative and predictable.” Really? The Cats currently rank fourth in the conference in scoring at just over 36 points per game, and fourth in total offense at 454 yards per game. The much-maligned passing attack accounts for 264 yards per game, better than every other team in the conference save Arkansas. If the offense is predictable, it does not seem to limit Kentucky’s ability to move the chains, as seen by the Wildcats 23 first downs per game, more than everyone in the Conference except semi-pro Alabama. As for individual performers, the Kentucky offense features the SEC’s second leading rusher (Locke), second leading passer (Hartline), leading all purpose performer (Locke) and third best all purpose performer (Cobb). Is not the test of an offense productivity? I realize that some people believe that we should be “throwing it downfield” on every down (incidentally, the same people who complain that Hartline has no arm strength), but it seems that the current plays work fairly well.

Perhaps my perspective on this issue is skewed somewhat by my long tenure as a Kentucky fan. I have seen bad offense from the Big Blue. It may be that some of the current critics do not remember, or have chosen to forget, some of the explosive offenses of the Bill Curry era. I remember first downs being celebrated by the sparse Commonwealth crowd like it was Mardi Gras. I remember a magical year in which Kentucky literally did not score a touchdown in the month of September. You may accuse me of having artificially low football standards, and that may be true, but I think the current criticism of the offense is patently absurd. This is especially true when you consider Kentucky’s overall talent level in comparison to the conference teams they are out-producing each Saturday on the field.

As an example of this point, take a quick gander at our friends from Baton Rouge. I realize this is an extreme case, as Les Miles coaching style reminds me more and more of Frankenstein singing Christmas carols on Saturday Night Live. Still, Miles’ offense features a four star quarterback, three five star wide receivers, a four star tight end and a four star tailback. And just what has that constellation of stars produced for Les? Eleventh in the conference in scoring offense and total offense, and dead last in the Conference in total offense. Now that is a fan base with a right to complain. But LSU is not alone in the talented personnel, anemic offense paradigm. Traditionally powerful programs such as Georgia, Tennessee, South Carolina, Florida and Arkansas all trail the Cats in scoring offense at this point in the year. Do you think any of these programs would trade rosters with Kentucky?

And then there are the defensive complaints, aimed largely at scapegoat of the month, Steve Brown. First, the defensive numbers are not quite as bad as you might expect them to be. Kentucky is currently fifth in the Conference in total defense, giving up just over 300 yards per game. Still, Kentucky has been admittedly bad against the run, and awful in defending the red zone, leading the Cats to near the very bottom of the pack in scoring defense. That being said, I remain befuddled at the focus of the fans on tactical coaching decisions rather than what I believe is the actual root of the issue: a relative lack of experience and upper echelon talent on the defensive side of the football when compared to our conference rivals. In its usual defensive formation, Kentucky starts five players who had no significant playing experience entering the season. And how many of even the experienced players would ever see the field for Florida, LSU, Alabama, etc? Yet we bash Steve Brown for being conservative because it is much easier in our minds to change the coordinator than to appreciably improve the size and athleticism of our existing players.

I am not in any way suggesting that it is not every fan’s protected right to gripe. Lord knows I mutter to myself and anyone in my general vicinity when I witness the Cats make a particularly boneheaded play. But this is a crucial time for the program. Kentucky has enjoyed modest, but stable success over the last four seasons. It is imperative that everyone, fans included, stay on board for the current transition. It is one thing for Joker to lose some games. The program is steady enough at this time to overcome that. But the program cannot lose its number one commodity: a loyal and supportive fan base. The Cats are three and two. They have not yet played a conference home game. They have seven games remaining, and will field a team capable of winning each game on the schedule. With the relative weakness of the division, and Kentucky’s fortuitous schedule, they remain in arguably the best position they have been at this point of the season in decades. It only takes one win; one magical LSU-type moment to reinvigorate the program. That can happen this Saturday night against top ten Auburn. But I believe without question that the odds of the Cats toppling the Tigers grow significantly longer if the fans are not behind them. If you have been going to Commonwealth for years, you know that the negativity and doubt from the bleachers does seep down to the field. Kentucky can not overcome that in this stretch. So be there Saturday. Put the negativity behind, and believe again. Go Cats.