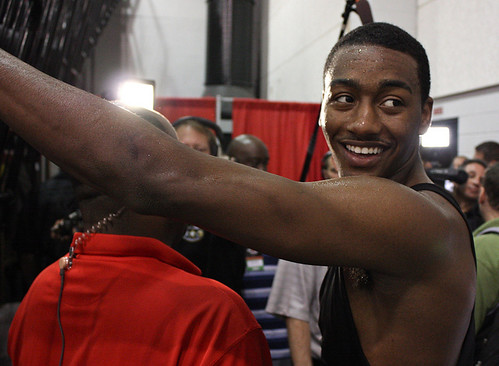 I’m going to take a break from my football swoon and planting vegetation on vacant lots to share some of the news that has been swirling around out there about the roundball. Serve it up, barkeep, and make sure it is heavy on the John Wall:

1) The Bleacher Report guys (Specifically Shady Botros. A great name) have another list up and this one deals with the more interesting match-ups of the upcoming NBA season. First up is the October 28th game between the Wiz and the Magic. Typically, this type of breakdown would involve something along the lines of Slytherin and Gandalf, but in basketball terms it is intriguing due to the opening of the new arena in Orlando, the old Arenas still playing for DC, and the new point guard that you all know and love. The rest of the list has the usual smattering of Rondo and Riley throughout, but there is no mention of Boogie’s debut. I would call that. . . Shady.

2) Here is one take on the 2010 NBA pre-season schedule from the Wizard’s perspective. BAD PUN ALERT! He uses the phrase “It’s going to be Wall-nuts”. That is just terrible. Acorn-y thing like that you will not find here on this blog. . . well, unless Lentz is running the show then it is no puns barred.

3) Some dude that plays for a cruddy NFC East team thinks John Wall is awesome. Pretty amazing to contemplate that a former Kentucky basketball player is the subject of discussions in NFL camps. The Big Blue talent is seeping into just about every venue (so is the Louisville basketball coach but on a much different level).

4) Victoria Dunlap. She’s good. How good? Good enough to be included on the pre-season watchlist for the State Farm sponsored Wade Trophy. In 1978, the Wade Trophy debuted as the first ever national player of the year award for women’s basketball. No Kentucky player has ever won the award, but since the last two winners were forwards and Dunlap is awesome, I like our chances this year. Also? She can totally dunk over BTI. Good luck, Victoria.

5) The Sports Guy debuted a podcast with my man Chuck Klosterman. Right out of the gate they begin discussing UK fans (or at least Calipari fans) LeBron James and Drake so it is worth a listen. They hold a pretty interesting discussion about the expectations of basketball fans and about the younger generation of players moving through the league. As is usual when CK is involved, they don’t adhere to the uniform approach that many other sports outlets have taken in regards to The Decision.