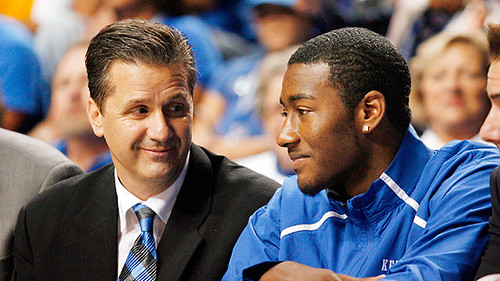 Aaron linked to this last night, but it is worth mentioning again that John Wall had to opportunity to opine on the employment future of his former coach. His assessment? Coach Cal is staying.

I understand that Cal should always keep his options open and I remember all the hoopla surrounding the Pitino years (will he go or won’t he was my least favorite off-season storyline in the early 1990’s), but there are certain people that help give you solid indications of a coach’s intentions. One of your best players saying that he feels “strongly that (Cal’s) going to stay” and that Coach is “at his dream school” are just about enough for me.

In the department of “Further Evidence Where None Is Required”, some of the better quotes from the article are about Calipari’s coaching style and relationship with the players. Wall states:

“He’s just like a father. He takes care of us like we’re his sons. He’s going to push you to make sure he gets the best out of you. He’s preparing you for the next level and he does a great job of it.”

That is just the type of thing you (as well as recruits and their parents) want to hear from your star player. It has been said before and I’ll say it again: Coach Cal gets it.