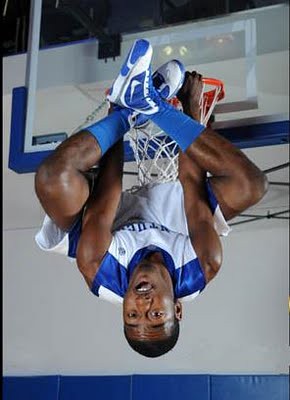 This past Monday, the owner of the Washington Wizards, Ted Leonsis, confirmed the worst kept secret in the professional basketball world: The Washington Wizards will take John Wall #1 in the upcoming NBA draft. In a dinner event with season ticket holders (Wait a minute, I have season tickets to UK football. . . where is my dinner? I demand at least a coupon for a free slice of Papa John’s and a side of neapolatin Dippin Dots.), Ted stated that he couldn’t really comment on the John Wall situation but, according to the Washington Post, he then let this slip:

A bit later, in response to a different question, he said, approximately, that he was convinced John Wall would hit the ground running for the team and make significant contributions right away.

The article also states that Leonsis has Gilbert Arenas’ back which indicates that he wants to keep the troubled point guard in the family (or at least appear that way to stave off any teams that might try to trade for Arenas for pennies on the dollar). The crowd and owner also seem to take a strange dislike to being considered a potential destination for LeBron James. I’m not sure that a team like the Wizards should be so vehemently against acquiring one of the best players in the game, but to each their own.

So there ya go. From the head honcho’s lips to your ears. Head on out to Dick’s Sporting Goods and stock up on gear with Wiz on it (which is totally different than stocking up on gear from Dollar General, which has a different kind of wiz on it) confident in the notion that one of your favorite UK players will be in DC next season. Now if we could just work on getting them to switch the name back to the Bullets . . .