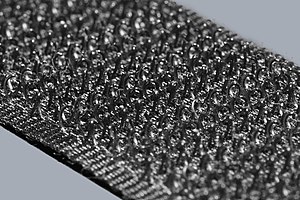 Good morning!  Did I wake you?  Sorry, I’m not used to doing this News and Views thing.  I offered to pick up Beisner’s shift to make a little extra money before I take a few days off for back-to-back Jimmy Buffett concerts.  Yeah, you’re jealous.  Anyway, let’s get to today’s News and Views in honor of Velcro.  That’s right, Velcro. On May 13th, 1958, the trademark Velcro was patented after being developed some 17 years earlier by Swiss inventor George de Mestral.  Mestral returned home from a walk with his dog and noticed that pesky cockleburs had stuck to his pants and his dog’s coat. Examining the burrs under a microscope, de Mestral found the basis for a unique two-sided fastener – one side with stiff hooks (like the burrs) and the other with soft loops (like the fabric of his pants).  Mestral immediately quit his engineering job and received a $150,000 loan to pursue development.  It took eight years to Mechanize the process of weaving the hooks, and it took another year to create the loom that trimmed the loops after weaving them. In all, it took just over ten years to create a mechanized process that worked, which he originally called “special napped piles of man-made material with some of these loops having the means of hooking near their ends.”  If you’re still reading this, you need help.  George de Mestral would later name his invention “Velcro”, a portmanteau of the two French words velours and crochet, or ‘hook.  Today, Velcro is used for everything from fastening shoes to hanging smoke alarms to those awesome inflatable jump walls.  Ok, that’s enough.  On to the news…

— In last night’s episode of “So You Think You Can Play The 4?”, Eloy Vargas’ AAU coach confirmed that Vargas will visit Kentucky. Look for Eloy to be taking in the sights and sounds of Lexington as early as tonight or tomorrow evening. The former Florida Gator, who denies ever hanging out with Dan Werner, has narrowed his list down to Kentucky, North Carolina, Arizona, and Seattle.  Vargas averaged 25 points and 15 rebounds per game at Darnell Dodson’s Miami-Dade Community College last season.

— In the never-ending Terrence Jones drama, we continue to wait.  Nothing changed yesterday.  It is unlikely that anything will change today.  The May 19 deadline is rapidly approaching, and once it passes, Jones cannot sign a letter of intent. However, he can still sign a financial agreement with a school, which can include a basketball scholarship (Ã  la Brandon Knight.)  This basically means that the longest recruitment of the Common Era could stretch out to be even longer. And we’re in for the long haul.

— UK has inquired about former UTEP standout Arnett Moultrie.  The 6’11 forward withdrew his name from the NBA Draft but said he would not return to UTEP.  Moultrie will have to sit out next season but will be eligible in 2011.  Gary Parrish calls him a tall and skilled future NBA player who could have the same kind of one year impact that Ekpe Udoh had at Baylor.

— Enough with the potential future power forwards, our former (and favorite) big man Patrick Patterson signed with an agent. Draft Express is reporting that Patterson has signed with Odell McCants of Capitol Sports Management, whose clients include ummmm… Patrick Patterson. Patterson is currently working out in Indianapolis and is projected to be the 11th pick by Draft Express.  I trust that Odell McCants will take good care of Tywanna’s baby boy in the NBA.  At least we know he isn’t wasting time working on his website.

— Details are emerging from the Kentucky Derby ticket scam, which involved former Cat turned Card Steve Masiello. The Courier Journal reports that a convicted felon/conman is linked to the scam and allegedly received $30,000 in cash transactions for Derby tickets on Masiello’s behalf.  The conman, Steve Netherton, plead guilty in 2007 to a 48-count indictment for taking more than $250,000 from 14 investors, banks and businesses.  If that’s not enough for ya, he is scheduled to be tried Sept. 7 in Jefferson Circuit Court after pleading not guilty to charges that he deceived Ticket City and JC Tickets into wiring him $125,000 cash for Ryder Cup tickets.  Sounds like a great guy to have on your side, right?  If Masiello is found guilty in the scam, it just further proves that Louisville coaches will screw anyone.  Check out the whole story here.

— Speaking of tickets, WWE Monday Night Raw tickets went on sale yesterday for the July 12th show in Lexington. So, yeah. Get those if that’s your thing. It will be Enes’ first official appearance in Rupp Arena and Matt will be in the front row wearing his favorite “Do You Smell What The Rock Is Cookin'” t-shirt.

— Coach Cal tweeted from the Ruby Tuesday salad bar yesterday.  You can act like you don’t care when you know you do.  Will someone please tell him that lettuce is being recalled?

— Game 6 of the Lebrondo series is tonight and our boy Rajon is looking to close the book on King James’ season.  Unless you have been living under a rock, and that rock had no ESPN or Twitter, you’ve seen the media backlash against Lebron after his Game 5 performance.  While I don’t believe the Cavs will make a comeback and win the series, I do think it’s a little early to start bashing LBJ and questioning his “legacy.”  He’s 25 years old and has a bright future in Chicago with Coach Cal.  Kidding.

I guess that’s all for now.  Stick with us throughout the day as we do all that ridiculous news and stuff.