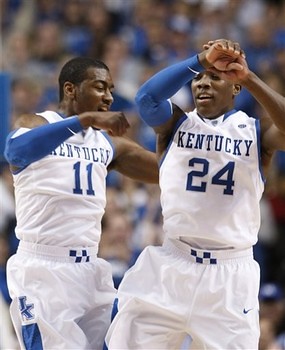 Just a few links before you head out to White Castle for that black-tie dinner.

-Danny Shanoff writes in his blog that Bledsoe/Wall might be the best freshman backcourt combination ever in college basketball. I know I would take John and Eric over that pair from Michigan.

-News outlets in Texas think that the Wildcats will not only win the SEC, but will be the #1 seed in the tournament. Silly Texans. Every good UK fan knows that the NCAA tournament will hose the Wildcats and send them as far away from the East or Southeast bracket as possible.

-Your friend and mine, Pat Forde, examines DeMarcus Cousins. He gives him the old compliment sandwich by sliding in remarks about his maturity in between calling him the best offensive rebounder in the country and best player on UK’s team. I’d like to see Pat get smacked around half as much as Boogie does during a game and see how maturely Forde handles it.

-Raphielle Johnson makes a good case regarding Kentucky’s problems with the zone and the consequences for such a weakness in the NCAA tournament.

-Gar Par talks about what wasn’t said in John Calipari’s reaction to the Nets opening.