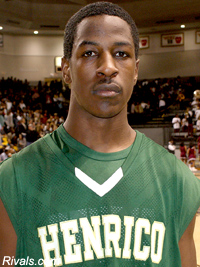 With the recent commitment of Tobias Harris to Tennessee, the same old questions are popping up again. Usually once or twice a week I’ll get the following question posed to me: “Outside of the usual guys that we hear about a lot, who are some of the other kids that UK is keeping an eye on?” I’ve recently thrown the name Chris Hill out there as one of those guys. Another is 6’4″ wing Justin Coleman.

Scout recently did an interview centered on Coleman’s transfer to Huntington Prep in West Virginia, wherein his new coach, Rob Fulford, talked about Coleman’s situation. Justin has found himself in the land of academic uncertainty but those problems are hopefully going to be fixed during his time in The Mountain State. Fulford also says that he has fielded calls from many schools regarding Coleman, Kentucky included. Some of the other names on his list are Arkansas, UConn, Marquette, Xavier and Kansas.

From a scouting standpoint, you’re going to hear strong, athletic and shooter mentioned quite often with Coleman’s name. He was considered somewhat under the radar around the time of the NBAPA Top 100 camp but definitely showed he belonged with the top players in the country while keeping his name toward the top of the high scorers list there.  Rivals currently ranks Coleman as the #8 small forward and #45 overall prospect in the 2010 class. Here’s Scout.com’s quick rundown of the kid: “Justin Coleman had a break out spring and summer. Voted the “Most Surprising Player” at the NBAPA Top 100 Camp, he also won the camp dunk contest. Excellent 3-point shooter, big time finisher. A cross between J.R. Smith and Von Wafer.”

So there ya go. One of the unusual suspects on UK’s radar right now. We’ll have more with Justin Coleman in the near future.