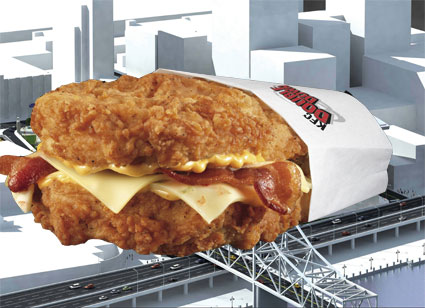 Last night was my first – and probably last – trip to the KFC Yum! Center. I should be reporting about the game and how nice the arena is, but I’m not. I thrive on random and that’s exactly what you’re going to get. Here’s a collection of random thoughts, moments, and opinions I wrote down after the game. Let’s take it outside the box score…

You want me to sit where? Matt and I were among the first media members to arrive at the Yum! Center – because we’re dedicated – so we were the first to go out on to the floor and scout out the seating arrangements. We were given a map when we checked in that clearly showed that he would be sitting on the baseline in the sixth seat from the north goal and I was assigned the first seat under the south goal. By the looks of the diagram, our seats seemed like two pretty prime spots. However, when we walked out to the court, we realized there weren’t any tables on press row. And not only were there not tables, we didn’t have chairs, either. We had been credentialed as photographers and were assigned a piece of tape right on the baseline as our “seat.” I like to think that most of the world’s most distinguished sports journalists sit Indian-style with a laptop, live-blogging a game less than five feet away from the action.

“I can’t eat cheese when I’m working.” Those were the words we overheard from a Yum! Center employee in the dining area of the media room before the game. While it sounds absurd, it actually makes sense. Cheese is a “sleepy food,” especially when mixed with snack crackers. It also gives you gas. So, the only absurd part of this encounter is that the Yum! Center served us cheese and crackers. That’s it. Cheese and crackers. Oh, and a soda fountain with an “Out of Order” post-it note. Thanks for dinner, cheap asses.

If you solve the Matrix, you can access the free Wi-Fi. This shouldn’t be a big deal, but I’m going to spin it that way. The Wi-Fi password for the game was a bit much. Instead of going with “dominican”, “republic”, or “15seconds”, the Wi-Fi password was “**YuMC3nt3r!”. Is that really necessary? I need something I can remember when I get to my seat. I shouldn’t have to use algorithms to get on the Internet. And I hope that’s the password for every event in the arena too. Enjoy it, just make sure you write it down before you go.

Okay, Jurich. You can turn the lights back on. We knew Tom Jurich would try to sabotage the game, we just didn’t know how far he would go to do so. The game was delayed for about fifteen minutes after player introductions because the overhead lights in the arena wouldn’t come back on. Had this game been played in a place like Memorial Gym, I might believe that it takes a while for the lights to heat back up. But this arena hasn’t even been open for a full year and you’re telling me you can’t get the lights to come back on? Cut the crap, Jurich.

Nice try with the white screen but it didn’t work. Someone came up with the brilliant idea of using a solid white screen on the video boards to light up the arena. While I admire their effort, it didn’t work. Fans sat through seven minutes of gloomy basketball before the place was lit up again.

Rajon Rondo’s shoes were bright. It looked like he was holding down turbo on NBA Jam. That’ll kill your stamina, ya know.

Louisville fans are so darn cute. There were two Louisville fans seated a couple sections away from each other and I’m convinced they were in a contest to see who could be the most obnoxious. There was the fan in the Hawaiian shirt we showed you last night, and a guy who weighed about a buck-twenty wearing an XL Louisville polo behind the Dominicans bench. Both guys were throwing their L’s up and rooting for the Cards, while using every minute of downtime on the court to tell John Wall, last year’s #1 overall pick, that he sucks. Only a younger sibling can get away with public behavior like that.

‘Pros vs. Joes’ called. They want their jerseys back. As someone pointed out during the game in Lexington, couldn’t we just call this game Pros vs. Joses and sell it to Spike TV?

Thank you for not wearing chicken buckets on your heads. Way to keep it classy, Cats fans.

Dear Louisville fans, UK did not just lose to Louisville. Yeah, Edgar Sosa and Francisco Garcia played two great games for the Dominican Republic. I’ll gladly stand and applaud both of their performances – I was very impressed. But don’t act like Louisville just beat Kentucky because two of your former players beat a team of former UK players. It doesn’t work like that. I won’t take the easy way out and say Sosa and Garcia finally had good coaching, either. I’ll just say, “See you on December 31.”

Joe B. and Denny need more reasons to hold a press conference. I could’ve sat and listened to Joe B., Denny Crum, and Coach Cal’s press conference all night. Where else can you hear two coaching legends talk about the best places to catch peacock sea bass? The answer is nowhere.

That’s all. I hope you enjoyed whatever it is I just wrote.

20 Comments for UK Pros vs. The DR: Random Notes From The Bucket