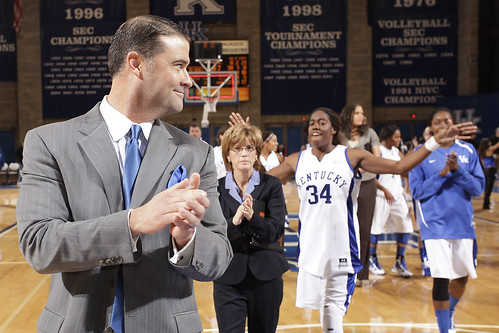 Lost in the hoopla surrounding the Tennessee game is the fact that the UK Hoops squad will end conference play today at 3:00p at Auburn. Unfortunately, this game isn’t on TV, but you can follow it on the radio or via that UK/CBS GameTracker deal. I compiled 5 Quick Facts as the Women’s Basketball regular season comes to a close:

1) I know that the Women don’t divide the SEC into East and West divisions like the men do (thanks to a commenter in one of my posts), but the Wildcats have yet to lose to any team that is considered an SEC West school. With a win today, they sweep that imaginary division.

2) The Wildcats have locked in a #2 seed and a first round bye in the SEC tournament which will be held in Duluth, Georgia next week.

3) Last year, UKHoops was 16-16 and they were projected to finish 11th in the conference this year. They currently sit at #2 in the conference with a 23-5 record due to a remarkable turn-around executed by head coach Matthew Mitchell.

4) Turning around a UK basketball team in one season isn’t the only thing Matthew Mitchell shares with John Calipari. The UK Hoops team went into South Carolina and left with a loss. Ten days later, the Men’s team suffered their first loss of the season in Columbia. This week, the UK Hoops squad went to Tennessee and the Volunteers beat them handily. Two days later, the UK Men go to Knoxville and leave with a loss. Creepy. I’m not saying their fates are definitely entertwined but let’s just say I’m really, really hoping the Women do well in the SEC and NCAA tournament.

5) The Wildcats will be the last team to officially play non-exhibition women’s basketball in Auburn’s Beards-Eaves-Memorial Coliseum. UK hasn’t won there since 2007 and is looking to close the gym by hanging an ‘L’ on the Tigers. UK is 24-12 all time against Auburn.

I was at the game last Sunday and it was awesome. Below is a video I took to show how packed Memorial was and hopefully capture some of the atmosphere. The crowd is a little subdued because I took the video as we were coming out of halftime, but you still get a look at how many fans are in the building. Even the Dancing Guy was there. Go Cats!