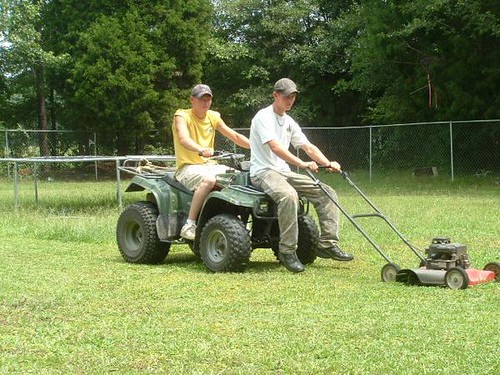 There are quite a few good things floating around out there that you might have missed while you were out mowing your lawn.

1) The New Jersey Nets have been turning it on as of late and in danger of catching the Minnesota Timberwolves thus lifting them out of the worst record/most ping pong balls slot. This article from nj.com details the angst associated with such a run. Personally, I think they should keep trying to win. The good karma generated by not tanking seems to trump the math every time. Plus it would suck double if they snuff out any motivational flame and then wiff on the #1 pick in the draft. Keep playing hard and let the fates decide it. Well, the fates and a refrigerated envelope that the Stern can pick out of tumbler.

2) Commenters from that same article are questioning the long held notion that the Nets should select John Wall first. They seem to think that Cousins is a better fit for the Nets (they lack a true scorer and power forward and have an above average/good PG in Devin Harris) and that he will develop more quickly into an NBA player.

3) Switching teams, the Houston Rockets are having trouble rebounding and some sites are questioning the reliance on Chuck Hayes. That is probably the strongest criticism that the Chuck Wagon will ever receive down there though. The entire team and most of the fan base love the kid and realize he is actually paying more minutes than he should in a back-up role. Of course, everybody in Kentucky knew Hayes was awesome all along.

4) Switching teams again to the Minnesota Timberwolves, Tim Allen lays out 5 steps for the Wolves to turn things around quickly. A big part of the equation (after drafting Evan Turner)? Drafting Patrick Patterson. Ooooh. Me likey. The Timberwolves with Al Jefferson, Patrick Patterson, Evan Turner, Kevin Love, Corey Brewer, and (possibly) Ricky Rubio? Oh man. That would be a great thing for Patrick and a more than appropriate reward for what he went through his first two years at UK. Minnesota would become my new favorite NBA team.

1) Some guy named Del C (from his profile: “I’m about business”) from chicagonow.com watches a bunch of tape on Derrick Rose and John Wall and compares the two. It is pretty impressive that he compared not only college games, but went back and researched high school tapes as well. Fairly interesting comparison. He thinks Wall is a more natural 3 point shooter and better in the clutch. Can’t argue with that.

2) The Bleacher Report profiles some power teams that haven’t been to the Final Four in awhile. Cry me a river Indiana, Arizona, and Louisville. At least you guys made it this decade. Michigan has a legit gripe although I think it might be a stretch to consider them a power team. Considering their other criteria, Maryland would be a better fit. Of course, Kentucky is included in the list. S’alright though. We’ll get there next year.

3) Ticket brokers around Indianapolis are lamenting the lack of big teams (read: Big Blue, both UK and KU) in the Final Four. In a shock of all shocks, prices are lower and there was a large sell off of tickets after Kentucky’s loss.

4) And finally, this piece by Brian Rickerd puts a nice, positive spin on the season. As long as UK is led by the pied piper of college recruiting, we should stay an elite program for many years. I like it. Until the eventual NBA lockout occurs and institutes a higher age limit, this is the type of basketball we can expect in the Bluegrass and that is a good thing.