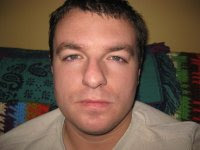 If you listened to yesterday’s Uncensored Podcast (and apparently over 6,000 of you did, which is crazy and makes us happy…and if you didnt, listen now) on the Local media in Kentucky, you know that we talked about the newest star of the UK blogging game, Danny Jett. For those of you that dont know Danny or his website (Danny Jett’s Inner Circle), it is a site dedicated to “Kentucky basketball and man topics.” I have known about Danny’s site for a bit and I admit to finding it fascinating. Danny is a former UK student manager under Bill Keightley, a huge UK fan and an interesting fellow. He seems to have recently taken to spending some time intentionally “homeless” in order to write about what people go through in those situations. His site is a plethora of live video chats, UK posts, movie scripts and ruminations on life. If you listened to the podcast, you will know Hubby has been a loyal reader for two years and likes it when he talks about “grilling in the snow without a shirt.” Danny has become the #1 topic of KSR conversations and we all have become huge fans since the podcast recording. If you get a chance, take a look at his site, listen to Hubby’s talk about it (he is the biggest fan) and embrace Danny Jett. A star is born….

— Huge news day this morning in UK land as the reorganization of the basketball staff took top billing, with Rod Strickland moved from Assistant Coach to a Basketball Operations job. That leaves a spot open for a new coach and speculation immediately goes to Kenny Payne, the uber-recruiter from Oregon. Payne played for the Cards back in the day and now after the seven day waiting period, would seem to be the favorite for this job. For what its worth, he told Rick Bozich today that he had not heard from UK and as of now, was happy being at Oregon. We shall see.

— In case you are interested, you can apply for the UK Assistant’s Job right here. My assumption is that you will be considered no matter your background, so go ahead and give it a whirl.

— The main reason people like the Kenny Payne hire and a possible reason for it being moved up to earlier in the summer is his connection to Terrence Jones. Payne is close to the Jones family and was the only reason he considered Oregon, even after they lost their coach. If Calipari can get Payne and that gets Jones…well that is quite a bit of deft work late in the game.

— Also we found out that UK will go to Canada late this summer to tour the country of our communist neighbors to the North. They will play some games, eat some maple syrup, meet Alan Thicke and generally do all that Canada has to offer on their tour. I for one am pumped up about it and sense a potential great KSR type event coming as part of the experience.

— Steve Masiello’s story keeps getting more attention. The latest connection was from the Courier Journal today, as Masiello’s ticket connections apparently include some characters with other ticket issues. The story keeps flourishing, but hey take solace Card fans, it cant be a big story since it only broke on this “uncredible UK homer site” right?

— Eloy Vargas arrives for his visit tomorrow. Before the weekend is over, you might have a new Cat. Stay tuned.

— Tonight you will get the first post from our newest contributor, James Pennington, formerly of the Kentucky Kernel. James was the beat writer for UK during his Kernel days and did a great job, while possessing top-notch writing abilities and a good sense of humor. James will be writing from time to time on KSR to give his insight into the UK team (and he followed them as closely as anyone not named Tipton or Dawson last year) and to have an actual journalist classy up this joint a bit. Welcome him tonight as he gives his first post.

More all day as we start scouting out the top teams in Canada to take down….