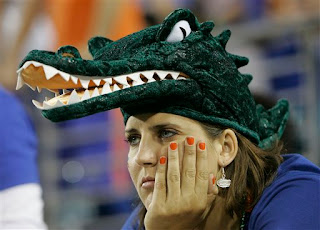 While Kentucky is making a surge back to the land of prominence, it seems that the rest of the SEC isn’t ready to lift the conference back into the top 3 conferences just yet. Coming into Saturday’s games, the SEC had 4 ranked teams in the AP and Coach’s polls with Kentucky (3/3), Tennessee (9/8), Florida (13/13) and Ole Miss (20/25). The same will probably be true when the next polls come out but there won’t be three SEC teams in the top 15 at that time. Not after USC (huh?) hosted Tennessee and Richmond (HUH?) rolled into Sunrise, FL for a “neutral” site game with Florida.

In all honestly, those “huh’s” might need their sizes reversed. While UT did have to play on USC’s home-court, the Trojans are currently ranked 186th in the RPI. At least Richmond has cracked the top 50 (38th). Still, the Gators should be able to hold off the Spiders with their massive following of Florida basketball fans packing the stadium and cheering them on (snickers). On Saturday, they didn’t, losing to the Spiders 56-53.

While the Volunteers get a bit of a break for traveling into a different time zone to play USC in Los Angeles, you just can’t excuse getting beat in the manner they did. After falling behind 33-20 at the half, the second half was no different as the Volunteers continued to take more of a beating than Tim Floyd’s wallet on signing day, eventually falling 77-55 to the Trojans.

Did I mention that the Trojans are ranked 186th in the RPI? I did? Well did I mention that USC has previous home losses to Loyola-Maramount (67-59) and Nebraska (51-48)? It’s true. Did I also mention that USC only used 8 players and only 6 played double-figure minutes while the other bench players received only 1 and 3 minutes of playing time apiece? Yeah, that happened too. Although UT won the turnover battle 18-8, their loss was a direct result of getting outrebounded 51-23 while shooting an abysmal 34.5% from the field, including just 9.1% from behind the arc.

C’mon guys, we can’t put the entire SEC on our back!! The SEC isn’t going to come close to sniffing a spot in the top 3 conferences so long as losses like this are allowed to occur.

(As a side note, UT and UF were two of four ranked teams to lose to members of the unranked on Saturday. #11 Georgetown lost to Old Dominion at home 61-57 and #16 Texas Tech lost at Wichita State 85-83)