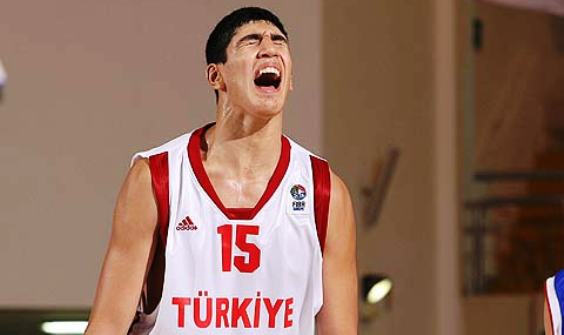 By now you have probably read Pete Thamel’s latest entry in his “Please forget that my Eric Bledsoe article was probably bogus…I really am a reporter worthy of the New York Times…I promise” memoir, the article on Enes Kanter. Thamel happened to be in Turkey for the USA Basketball World Championships and did an interview with the GM for Enes Kanter’s team in Turkey. The GM said a number of things, most importantly that the club paid Kanter over $100,000 while he was on the team before the age of 17 and that he was paid $6500 a month in salary during part of that time. The GM also produced a number of Dan Gilbert-esque quotes aimed at trashing Kanter as a person, but the heart of the story and the most important part for his eligibility is the amount of payment. The GM refused to show Thamel proof of the payments, and Thamel does note that there is an incentive for the GM to lie about the payments as they will only be eligible for money from NBA teams if Kanter does not play college basketball. However the GM does insist the payments were made at that all he wants is to tell the “truth” to the NCAA.

As a starting point of course, I have no idea what money was paid to Kanter by his Turkish club. But after months of stonewalling with the NCAA, we do now know that the Turkish club has at least given the organization something and they have taken the position that they will fight to see him be ineligible, rather than simply just refuse requests. With that said, the case will break down like this:

1. Kanter was Given Money of Some Sort: The question then for the NCAA’s purposes will be how much and what for. Under current NCAA rules, Enes Kanter could have been given money for living expenses, room and board, meals and some day to day life expenses. Over the course of 18 months, he was clearly paid some amount of money, but how much will be the key issue. If it could be deemed a cost of life fee, then Enes might still get eligible. If it is a salary that manifests a desire to be a professional, he wont be deemed eligible. It is that simple.

2. Are the Turkish Club’s Claims Verifiable?: This would seem to be a simple question of documentation and verification. The GM tells Pete Thamel that he was paid, Kanter and his family have said that he was not. Since Thamel did not see the actual documentation (another similarity to the Bledsoe case), we just have to determine whether the GM’s word is reliable. One would assume that a basketball General Manager wouldnt lie to the world’s most known newspaper but then again one would assume that a team with a vested interest in a result might spin information in a way that most benefits them. Bottom line, we can all guess, but we dont really know. The NCAA will be the only entity to see the documentation and they will decide.

3. Whatever Money was Paid, Was it Too Much?: This is actually a much tougher issue to dissect than most in the media are acknowledging. The rules in this area are all new and the NCAA has set no precedent for which schools can follow. Will it be the case that the NCAA will set a certain cost that it deems too much and if that has been exceeded, then the player isnt allowed to play? Or will the NCAA set that cost and then determine that if it is exceeded, Kanter must pay it back? It isnt clear how much money is too much money in this case. A full scholarship and living expenses to Harvard is likely worth more money than a full scholarship and living expenses to UT Martin. Does playing for a top club in an expensive city (Istanbul), with your family, etc lead to you be allowing to get more money than if you played in a small town in the middle of Estonia? No one at this point really knows and the NCAA will be setting the precedent for all schools to follow going forward.

4. Was there a Desire to be a Professional?: I have talked to a number of folks around this case and they all tell me that the key issue for the NCAA will be whether the player had a desire to be a pro. That will be determined in part by money taken, but also by secondary issues. For Kanter, some of those work in his favor. His father is a doctor and a professor and the family was not in need of money. Thus, the idea that he would jeopardize his potential future as an Amateur for a piddling amount of money would seem unlikely. Plus, Kanter left the team while he was 16 and he didnt seek to sign other deals with clubs…which one might assume likely if he wanted to be a professional. These secondary facts, in addition to the money, could play a role in the decision, especially if the total amount paid is somewhat murky.

5. What Will the Publicity Do to the Decision?: In reality, while the New York Times article gets a bold headline with the money amount, the information in it isnt necessarily new. Everyone knew Kanter was given some money, the question was just how much and what for. The NCAA also obviously knew what was given by the Turkish team, especially if the papers were sent to them. The only difference is now the public knows. That means the media can all Retweet each other and pat each other on the back, but it also means that the NCAA will feel it has to publically justify whatever decision it makes. A 100,000 dollar payment is a juicy headline and even if the ultimate decision to declare Kanter eligible makes sense under the rule, the NCAA will feel pressure to be very thorough in explaining why, with the Thamel/Forde press brigade waiting to pounce. That publicity could push a close case in the other direction and might make the NCAA simply decide that ineligibility is the easier decision to justify.

Regardless, at this point the decision is in the NCAA’s hands. Whether the GM’s claims are correct or not will only be known by that organization and how the NCAA wants to structure compliance under its new rule will be determined in this case. Thamel’s article showcases the Turkish side of the story and Kanter’s side was set out in the Decourcey piece earlier in the day. They may be both correct, incorrect or some mix in between. And even if all are correct, what the NCAA does with that information is unknown. What we do know is this….in two weeks Enes Kanter will either be the key cog in a potential Final Four team, or a “what might have been” UK legend like Shawn Kemp and Gunther Benke.