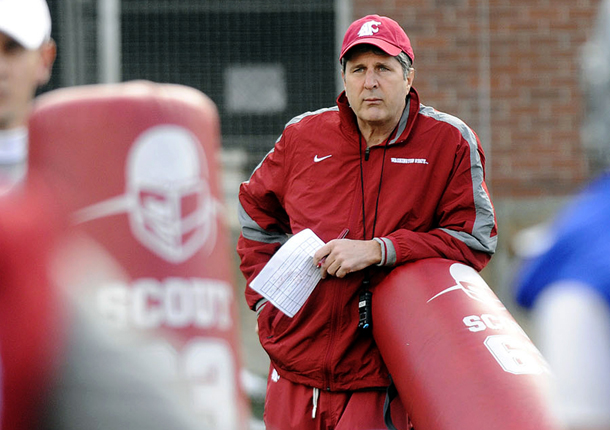 Mike Leach has been a familiar name around the Kentucky football program for years. Even though he was just recently hired to take over the job at Washington State, his name has once again been thrown around by some during Kentucky’s current coaching search. Mike Leach had a messy ending with Texas Tech, entangled in player abuse allegations.

Similar troubles continue to plague Mike Leach. Marquess Wilson, a second team All-Pac 12 member, announced that he was quitting the Washington State football team on Saturday. The news came following an indefinite suspension for Wilson on Wednesday by Leach for violating an unspecified team rule. Following a crushing loss last weekend, rumor has it that Wilson walked out of a team conditioning practice the following Sunday morning.

Wilson issued a heavy statement/letter to the Washington State fans last night, which included allegations of his suspension being an effort by the athletic department to cover up what is really happening in the locker room. Wilson also claims that the new coaching staff prefers to belittle, intimidate and humiliate the players on the team. In more simple terms, Wilson calls it “abuse.”  Read the letter in it’s entirety from an article in USA Today below:

It is with a heavy heart that I announce my decision to forgo playing football for Washington State University. I realize the school is saying that I am suspended for violating team policies and may return next week, but this is a lie. This is an attempt by the athletic department to cover up what is really happening in that locker room.

It is been a privilege to be a Cougar, to perform on your field and wear the Crimson and Gray. I would like to thank Washington State University for giving me the opportunity to do what I love most, to play football and receive a quality education for the past three years. I’m grateful to the athletic department for the coaching, care and encouragement I have received prior to this season.

This was going to be our year. My teammates and I were aspiring to be the winning team you deserve. Unfortunately for all, the new coaching staff has destroyed that endeavor. I believe coaches have a chance to mold players, to shape men, to create greatness. However, the new regime of coaches has preferred to belittle, intimidate and humiliate us. This approach has obviously not been successful, and has put a dark shadow on this program.

My teammates and I have endured this treatment all season long. It is not “tough love”. It is abuse. This abuse cannot be allowed to continue. I feel it is my duty to stand up and shed light on this situation by sacrificing my dreams, my education and my pride. I resign from this team. I am deeply sorry to those I am letting down. I am not a quitter. I was raised by my family, and many previous coaches to exhibit dedication and embrace sacrifice, but there comes a time when one has to draw a line in the sand.

Lastly, I thank my fellow teammates, those who also have left the program this year, and those we are leaving behind. I hope our departure will bring awareness to the physical, emotional and verbal abuse being allowed in the locker room and on the field. I pray for healing and recovery for all those who have been hurt by this treatment

“It is unfortunate that Marquess has chosen not to go through the weekend and have the subsequent visit with me as we had discussed last Tuesday. I was hopeful to provide additional guidance if he was willing to meet the standards that have been set by Mike Leach and his staff in their effort to establish a competitive football program at Washington State. Unfortunately, during times of coaching transitions, departures are not uncommon.

We have procedures in place that were developed to monitor student-athlete welfare in all of our sports programs. We will continue to follow those procedures and modify them if needed.

I believe I join many Cougars in wishing Marquess well in his future endeavors. WSU athletics plans no future statement at this time.”

Needless to say, the situation at Washington State following a disappointing year on the football field is not looking too great.