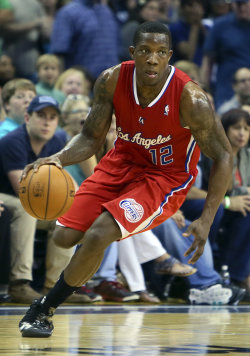 As reported by ESPN, the Clippers and the Celtics are considering an unusual trade involving Eric Bledsoe, Kevin Garnett, DeAndre Jordan, and Doc Rivers- yes, the Celtics coach himself. The earth-shaking trade is really confusing, so I’ll let ESPN do the explaining:

The initial talks with Boston, sources said Saturday, are focused on the Clippers satisfying Boston’s compensation demands to let Rivers out of his lucrative contract and corresponding trade proposals aimed at bringing Garnett to town with Rivers.

The Clippers, sources said, are willing to surrender cash and multiple draft picks to secure Rivers’ services and offer young center DeAndre Jordan as the primary piece in a deal in exchange for Garnett.

But sources said Saturday the Clippers, at present, are refusing to include the highly coveted Bledsoe with Jordan in the same trade in hopes of keeping Bledsoe for a separate transaction.

Sources say the Clippers want to keep open the option that they could package Bledsoe with Griffin in a sign-and-trade offer for Howard after the Lakers’ center becomes a free agent on July 1. ESPN The Magazine’s Chris Broussard reported Friday that Howard and Clippers star Chris Paul have been in consistent contact in recent weeks in hopes of landing on the same team via free agency.

Got that? Me too. Kind of. We’ll see how it shakes out for Eric in the next couple of days.