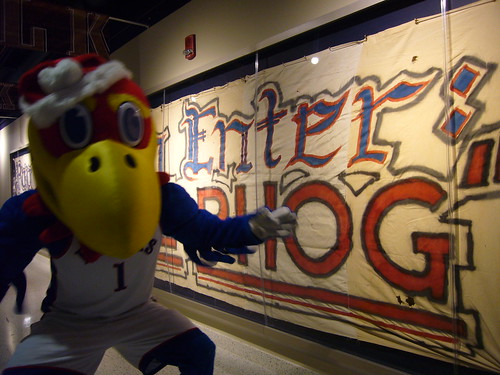 Doron Lamb and Brandon Knight will be making the trip to “Late Night in the Phog,” which is Kansas’ midnight madness, on Oct. 16th, according to a few reports, ESPN and Rivals included. Other players that will be in attendance that night, not including Kansas alumni, will be 2010 KU commit Royce Woolridge, 2011’s Josiah Turner and 2012’s JP Tokoto, according to the Lawrence Journal World.

This article came out last night, which basically gives reasons why Brandon Knight is leaning toward Kansas. The website, Nothing But Net, uses the official visit, a rumor and the fact that Self is going to make a trip to Florida to see Knight as the backbone of their argument. What they don’t point out is the fact that Brandon has set up in home visits with many of his top schools during the second week in September, Kentucky included, and also has official visits set up with other schools. UK will get an official visit from Knight on the weekend of the 19th, which is the weekend following his full week of in-home visits.

I’m not sure about Kansas’ thinking on having all these guards in at once, or if this is the normal Kansas recruiting game plan, but they sure do have a lot of guards coming in during their midnight madness. Doron Lamb is a combo guard coming out in 2010, Royce Woolridge is a shooting guard in the same class and Brandon Knight will be a point guard or combo guard at the next level, also in the 2010 class. Now look at Kansas’ roster. Seems like a pretty packed house for guards and not just role playing guards either. Travis Releford, Tyshawn Taylor and Elijah Johnson are just some of the very highly recruited players that could still be on the roster in 2010. With the trend in college basketball swaying more towards playing many guards at once, the roster is understandable, but I’m just having a hard time seeing how showing a top recruit that he’ll have tons of competition for playing time is the best way to lock him up.

-First and foremost, I’d like to point out that some of the other websites that picked up on my story of Brandon Knight’s Top 5, misreported or misquoted my quote from his mother and turned a Top 5 into a Final 5.

– We told you before about UK’s in-home visit scheduled with Adreian Payne on September 12th. Matt Scott, of Kansas Espn-affiliate the Shiver, says that Payne will be getting a visit from the Kansas staff on September 15th.

– The fact that Marc Krebs received the last scholarship last night, tells me that UK is all but done with the Eloy Vargas thing. Time to move on.

– The Five Star Camp in Virginia is hosting a few UK recruits, according to ESPN, including Tobias Harris, Kyrie Irving and Doron Lamb.

– Kyrie Irving told ESPN at the Five Star Camp that he has an official visit scheduled with Duke for September 18th. The other official visit that he said he was sure to be taking was to Indiana but that date wasn’t revealed. Seton Hall, Georgia Tech, UConn, and Kentucky were named as the other schools he is considering. Again, Kyrie didn’t say Texas A&M, so I’m guessing that they’re out of the running, even though he bounced back and forth with them this weekend.

– Jody Demling spoke with Stacey Poole’s father last night. Poole still has plans on visiting UK, although he previously said he would be here before the end of August. His previous target date for a decision was at the end of August but now that he is saying his visit with UK might come in the next couple weeks, that decision may be delayed. Poole’s father also told Demling that UK was “#1” on his son’s list. Poole may also swing by IU during his Lexington trip. In Orlando, Poole said that UK, Clemson, Florida, Indiana and UConn were his top 5. Since that time, he has also given some love to South Carolina and Oklahoma.

– Check out the new version of Rival’s database. This version is definitely flashier and has a feature that UK fans are sure to completely ruin: a “your rating” star system. Expect all UK commits to become immediate 5 stars and all UL commits to drop a few stars upon their announcement.