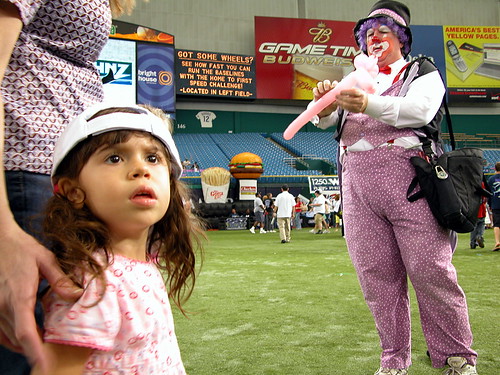 It is late and I am very tired, so we will make this quick….

— Matt May reported earlier today that UK-UNC may be the opening game of the season this year and will kick off ESPN’s basketball coverage for the season. #1 team on their home floor with a national audience. Welcome to college Darius, DeAndre, Kevin and Josh!

— Got to speak a bit with Michael Hartline in the last few days….came away VERY impressed with the kid. While we will see what happens on the field, the kid’s head is in the right place and I feel good about his role going into the season.

— Scout.com reports that Kentucky got another commitment today…this time from WR Justin Bean out of Mississippi. The hits just keep coming.

— The Tampa Bay Devil Rays are fun to watch…the picture above was from their media day this year, but after sweeping the Red Sox again, they are now 3 1/2 up in the AL East. Dicky V is excited baby….

— Jay Bilas was very interesting tonight on the show. He took up for Billy Clyde on the 8th grader commitment saying that while he thought it wasnt really beneficial, it didnt hurt anything either. “Since when is it a bad thing to offer a kid a free education to college?” He also had an interesting take on the Brandon Jennings decision to possibly go to Europe and play next year….a take which was countered by Bomani Jones later in the show. Hope to have that back and forth up later in the week.

— No one is working in Louisville tomorrow….but Jones and Bruce will be open for a half day for your law needs. Then its off to the golf course for me to show Quail Ridge a thing or two.

— Steve Masiello….what else can you say.

— Saw Perry Stevenson this week and asked him if he was having a good summer, “just getting huge man, thats it.” Go get em Perry.

— Talked to a scout today who told me that in the Class of 2009, he thought Kentucky was recruiting “at least 40-50 kids” to some degree. Talk about casting a wide net….

— Bobby Maze is going to be fun to taunt….he will either be a star at UT or a lesson for Bruce Pearl on recruiting.

— Speaking of Pearl, 2.3 million a year now making him one of the 5 highest paid coaches in America….I think UT wants to keep him.

— There are more great Shagari Alleyne stories than one could imagine….enough to fill a book….I hear more every day and they make me happier each time. We didnt know what a comedy treasure trove he truly was.