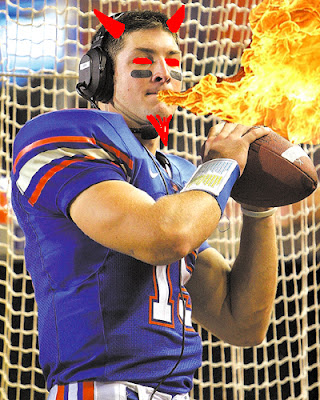 As we get set to welcome the #1 team in the nation into Commonwealth on Saturday – a team that thoroughly embarrassed the Cats in a 63-5 blasting last year in The Swamp – the emotions don’t seem to be quite as high as they typically are when an opponent of this caliber comes to square off with the Cats.  While it’s entirely possible that UK fans have seen too much heart break or the combination of last year’s drubbing and some uncertainty stirred up by a close Louisville game leave us all with an emotional wall visible from space, it just doesn’t seem right.  We should all be pumped.  Every single man, woman and child.  These are the opportunities that allow players to become legends and give fans the “where were you when…?” memories.  But, yet, it seems like the fire isn’t there.  Why?

I blame Tim Tebow.  I think people aren’t getting as fired up for this game because a part of them won’t root against college football’s most recognizable face.  For some reason or another, it’s not ok to hate Tim Tebow unless you’re not a Tennessee, Georgia or Alabama fan.  Last season, anytime Tebow’s name was brought up on this site and it wasn’t in the most reverent of fashion, the comments section exploded into a mass questioning of my morals and readers defended Tebow more feverishly than any SEC team ever has.  But why?  I don’t get it.

To me, it’s quite easy to hate him.  He is dominant at an all-time great level.  He plays for a hated rival.  He’s crushed us once and broken our hearts twice.  He sometimes sports a line beard.  He pumps his fists and beats his chest at meaningless points in the game like Joakim Noah.  His generic “rah-rah” speeches are too corny and cheesy for Disney.  He plays the humility card while posing shirtless for fashion magazines and allowing his words to be immortalized all over campus.

And, yet, rooting for him to fail has become the 8th deadly sin for some reason.

Call me old fashioned (and I’m sure some of you will call me worse), but I don’t care how many foreskins he snips or how many prayers he says.  I don’t care if he donates a kidney to my mom.  As long as he’s wearing that orange and blue on Saturday, I’m going to hate him.  And I will hate him at an all-time level.  I want him to fumble and I want him to throw interceptions.  I want Micah Johnson and the Commonwealth turf to make multiple Tebow sandwiches.  And, finally, I want him to end his evening with his eyes swelling with Gator tears on the Commonwealth sideline and quoting Might Ducks or something outside of the visitor’s locker room.

Then, maybe in a few years, I’ll calm down and let him teach my kids’ Sunday school class.

(1) The big news of the day, obviously, was the commitment of Stacey Poole, who becomes the first member of John Calipari’s second Kentucky recruiting class.  Poole made the announcement on ESPNU on a program whose production value was just a notch or two below YouTube Sports.  Many of the names we’ve heard on UK’s 2010 radar the past few weeks have been point guards, with a couple of big guys thrown in the mix, but Poole is a true wing player in the athletic mold that Calipari loves.  Plus, his dad was a Gator and he was taken out of Florida right under Billy Donovan’s nose.  If the Cats can go into Florida and grab Brandon Knight too, all three of the Florida basketball fans could start to get restless.

(2)  After reporting a few days ago that Billy Gillispie was offered a plea deal, WYMT is now reporting that Gillispie will not have his DUI charge amended down.  While the Anderson County Attorney would not comment about a potential deal offered, she said that Clyde would not be receiving any special treatment.  Seems fair, I guess.

(3) What about the Ole Ball coach bringing up the Cats after his team’s upset of #4 Ole Miss?  When being interviewed by Erin Andrews about big wins at South Carolina, Spurrier mentioned the Thursday night upset of the 8th ranked Wildcats in 2007.  A painful reminder of another missed opportunity against a Spurrier team, but a sign of respect from one of the games great all-time coaches on national television can’t be a bad thing.  Another similarity in the games:  Eric Norwood was and is still a beast.  Two defensive touchdowns against UK in ’07 and 10 tackles and two sacks tonight, which made him the Gamecocks’ all-time sack leader.

(4) Speaking of the Worldwide Leader, apparently Jay Crawford stepped into the batter’s box against Jennie Finch in what appeared to be UK basketball warmups (easier to see on Sportscenter).  No doubt, Brandon Knight is making note of this at home and getting ready to commit.  This is exposure that goes miles with recruits.

(6) Over on his blog, Tom Leach has a couple of very cool interviews posted.  Click on the links below to listen

Tom Leach and Jeremy Fowler of the Orlando Sentinel

That’s it for now.  Stay tuned throughout the day as we get you prepped for the Florida game and Drew stops in with his “They are who we thought they were” post.  Remember, it’s ok to hate Tim Tebow.  See you in a few…