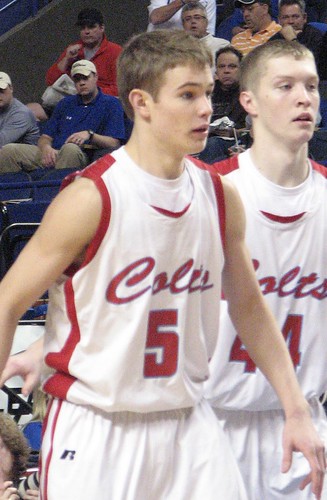 The sports schedule is always a little hectic. MLBaseball is rolling toward the final 40 or so games. NASCAR is running strong. School is starting. Mondays are good days to plan out your week and make sure you don’t miss any of the UK-related action.

Monday (8/16/10) –Men’s Basketball – Kentucky at Western Ontario – BBN – 7:00p EST: So I’m back with TWTIATB since school is starting soon and that means the return of UK sports. Of course, this time of year has a little extra spice because of the basketball being played and that is just fine with me. The only problem I had was that I was switching back and forth between Fox Sports Ohio standard and the PGA Championship on CBS HD. Combine the feed with the low lights of St. Denis Athletic Center and it felt like Kyle Macy should be playing in the game not commenting on it. The difference between CBS HD and FSO is like the difference between the Mona Lisa and a picture your kid drew in 2nd grade art class (And the comparison holds because you love your kids picture, no matter how crappy it looks, like you love the Cats. . .see? Meta!). Anyway, the Western Ontario Mustangs have purple and white colors and apparently have a great cheerleading team. Their two tallest players are 6’7. Jorts should have a field day.

Tuesday (8/17/10) –Men’s Basketball – Kentucky at Windsor – BBN – 11:00a EST: The Lancers were surprisingly scrappy, were they not? I didn’t really expect their shooting touch or their slashing ability. Just goes to show how a team that plays well together is always a threat in basketball. The early game means the instigation of one of my favorite aspects of adult life: Sporting events that you can watch at lunch. Unfortunately, I’ll be out in the field so you guys will have to get some wings at B-dubs in my honor. I also can’t let the Canadian Tour end without a shout out to my fellow Jessamine Countian, Jarrod Polson. The pride of the original JCHS is getting a scholarship and played well in his debut for the Cats.

Saturday (8/21/10) –Women’s Soccer – Coastal Carolina at Kentucky – 6:00p: Ah, my favorite opponent: The Chanticleers (Also, anything that references Chaucer makes Chris Tomlin swoon). The Chants lost an exhibition to Temple last week so expect the Wildcats to tear these gals a new one. On the CC site they have this game at 7 and UK has it at 6 so keep that in mind if you are thinking about going. BTI will be along later to make fun of soccer. . .again.

Sunday (8/22/10) –Women’s Volleyball – Blue/White Game – 3:00p:Your women’s volleyball team returns fresh off their run to the Sweet 16 in last season’s NCAA tournament. The team looks to improve on their 29-5 record (if that is possible) last year and get even farther into the NCAA tourney. The Cats clawed their way up to a #7 ranking last year. In other words, they are pretty darn good. The Blue/White game will serve as the team’s tune up before opening the season next week in the AVCA Showcase against Nebraska.