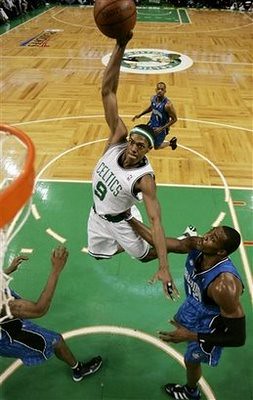 The sports schedule is always a little hectic. Pro basketball and hockey have entered the play-offs. Baseball has started and the Reds are kicking butt (sorta). NASCAR is running strong. Horse racing is building toward the the third leg of the Triple Crown. Mondays are good days to plan out your week and make sure you don’t miss any of the UK-related action.

Monday (5/24/10) –Basketball – Orlando Magic at Boston Celtics – ESPN – 8:30p: There really is only one significant storyline to this Magic/Celtics series (outside of the atrocious coaching decisions of, as Jason Whitlock has stated, Stan Van Dumby) and that is the continuing development of Rajon Rondo into one of the best point guards in the NBA. Magic Johnson took the opportunity during the last game and on ESPN several times thereafter to declare Rondo to be the current “best all-around point guard in the game.” We all know that Earvin is subject to a little bit of. . .enthusiastic over-statement from time to time, but the evidence on the court suggests he may not be that far off. The counter-argument is that he has 3 future hall-of-famers drawing defenses away from his cutting lanes and his set shot makes you wince, but that doesn’t totally knock the shine off his sick athletic moves, spot-on passing, and generally superb game management. Just for fun, here is my list of current ‘Top 5 Best Point Guards In The NBA’. Feel free to add your own in the comments.

1) Chris Paul – Put him on the Celtics and he is just as good if not better.
2) Deron Williams
3) Rajon Rondo
4) Steve Nash
5) Derrick Rose

Wednesday (5/26/10) –Men’s Tennis – NCAA Singles and Doubles Championships – TBA: Last week, your #11 Wildcats walked into a buzz saw. Defending champion Southern Cal blanked the Cats 4-0 and sent them home from the tournament. Congrats to the Wildcats for a great season. In the Singles and Doubles competition, you have 3 Big Bluers that have accepted at large bids and will begin play this week. They are Kentucky native Eric Quigley, Alex Musialek (From? France!), and Brad Cox. Quigley and Cox (great name for a law firm, by the way) will team up for the doubles portion of the event as well. EQ is the highest ranked UK player at #12 in the nation. Good luck, gentlemen.