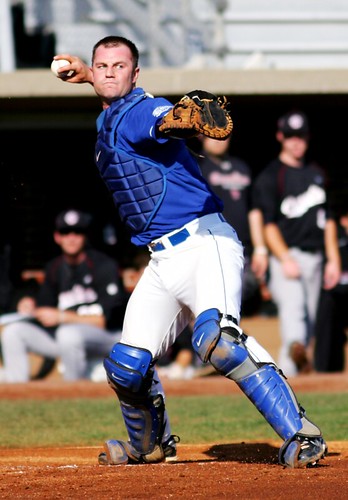 The sports schedule is always a little hectic. Pro basketball and hockey have entered the play-offs. Baseball has started and the Reds are kicking butt. NASCAR is running strong. Horse racing is building toward the the third leg of the Triple Crown. Mondays are good days to plan out your week and make sure you don’t miss any of the UK-related action.

Tuesday (5/18/10) –Baseball – Kentucky at Murray State – 7:00p: Now that is what Willis was talkin’ ’bout. As reported here all weekend, your Wildcats took the defending NCAA champion Tigers to the woodshed with a three game sweep. UK won the last game in dramatic fashion with a grand slam home run by Marcus Nidiffer in the bottom of the eighth. A brilliant turn-around after losses to Indiana and Lipscomb last week. Really, at this point, the Cats are playing for a spot in the SEC Tourney (it only accepts the top 8 teams) so out-of-conference opponents aren’t high on the agenda (that includes you, Murray State). As Matt noted below, the Big Blue is in a tie for the last spot in the tourney. . . sorta. They are actually in a tie for the last two spots with LSU and Tennessee (Birthplace of? Marcus Nidiffer. Poached!). The good thing is that UK is in the driver’s seat as it currently owns the tiebreaker against both teams. All the Cats have to do is win 3 games against Georgia in Athens (starting on Thursday) and they are in. UGA has been UGLY in SEC play having been swept by every conference opponent since a win against Ole Miss way back on April 11th. Good luck to the Wildcats and also? Don’t forget to vote.

Friday (5/21/10) –Men’s Tennis – NCAA Team Championship – Athens, GA – 9:00a: I told you Lexington was a tennis town. The Wildcats are now in the Sweet Sixteen of the NCAA tournament after a win against the #24 Georgia Tech squad on Sunday. Big Blue is ranked #11 in the country and takes on the USC from the west coast in Athens, Georgia. The crimson and gold is a hefty opponent for the Cats as USC is ranked #5 and is the defending NCAA Tennis Champ. The Trojans have been to the tournament 32 times and have won it 17. I’m no math wiz, but that is over half, right? No matter. Look for Dennis Emery’s squad to pull the big upset and send the SoCal boys back to the coast to wait for football season to start.

Saturday (5/22/10) –NBA Basketball Playoffs Game 3 – Orlando Magic at Boston Celtics – 8:30 – ESPN: This Celtic story is pretty crazy. Everybody who was anybody in the NBA pretty much assumed the Celts would be done early in the playoffs based on a pedestrian ending to the regular season for Boston. The players kept indicating that they would kick it into gear once the post-season started, but, other than our man Rondo, everyone on the Celtics looked old and done. Bob Ryan and his band of merry Association reporters should have listened to the player’s assurances. Big Green stole home court advantage from the rusty Orlando Magic on Sunday and begins their homestand on Saturday. Since Rajon is the only Cat left in the post-season, this will be the team I will be cheering on for the rest of the tournament (which is scheduled to end in roughly the same amount of time it takes KSR to hold a blogger contest). I’ll leave you with this question that was being posed around the BBQ’s this weekend: If you had to pick a point guard for an NBA team right now, would you take John Wall or Rajon Rondo?