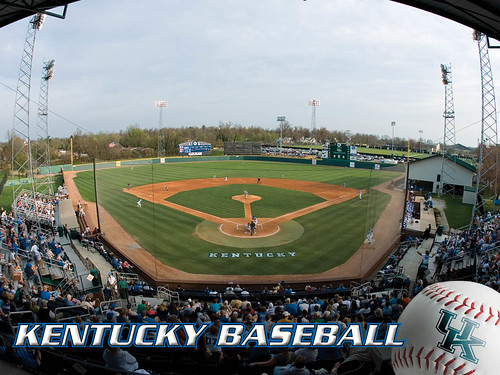 The sports schedule is always a little hectic. Pro basketball and hockey have entered the play-offs. Baseball has started. NASCAR is running strong. Horse racing is building toward the the second leg of the Triple Crown. Mondays are good days to plan out your week and make sure you don’t miss any of the UK-related action.

Monday (5/10/10) –NBA – Playoffs – Orlando at Atlanta – TNT – 8:00p: Here is the current tally of Wildcat players still alive in the NBA playoffs: 2. Of course Rajon Rondo is still driving the Celtics to an upset bid over the sainted LeBron James and his Twitterfied elbow, but Randolph Morris is still alive and keeping the bench warm down in Atlanta. This is probably your last opportunity to catch a glimpse of Randolph as his Hawks are down 0-3 to the Orlando Magic and Atlanta isn’t known for being a hard-working, comeback team. There is a 99.9% that every player in Hotlanta already has their tickets to Atlantis purchased and ready to fly out on Tuesday. Just to bring it all back around to UK, Orlando is led by Stan Van Gundy who everybody remembers played Fredo to Pat Riley’s Michael Corleone during his stint with the Heat in 2005-06. It was the biggest, most demonstrative emasculation this side of Wyatt Earp making Johnny Tyler wet his britches. Van Gundy will just stand there and bleed, thank you very much Mr. Riley, sir.

Tuesday (5/11/10) –Baseball – Kentucky at Indiana – 4:00p: So what happened with our baseball team that hasn’t won a series since the beginning of April? They greeted the #4 Gamecocks at the door in Lexington and took 2 out of 3. USC and Florida are the class of the SEC (and the nation) this year and your Wildcats just kicked around the red chickens from the coast like they were a ‘D’ league softball team. Currently, the Wildcats are in a fight to make the SEC tournament. The SEC only allows the top 8 teams in and UK is chasing Tennessee while trying to hold off Alabama for the 8th seed. Indiana won’t really help the Cats with the SEC tournament, but the experience will help them get ready for two huge series’ against LSU and Georgia to end the season.

Thursday (5/13/10) –Softball – SEC Tournament – Fayetteville, AR: Well, even though the Wildcats dropped their final game of the series against Ole Miss, UK will enter the SEC tournament as a #6 seed and participate in tournament play for the second straight year. That is the good news. The bad news is that their opponent is LSU. The Tigers clashed with the Wildcats at the end of April and the Big Blue didn’t fare too well. LSU took every game of the series and outscored the Cats 17-6. The silver lining in this murky cloud is the Wildcat history of upsetting opponents. Last year, UK entered the SEC Tourney and took down #3 seed Georgia in the first round. LSU’s seed this year? #3. I see a pattern developing. Good luck, ladies.

Friday (5/14/10) –Track – SEC Championships – Knoxville, TN – TBA: Oh, man. I’ve got nothin’. I know Track and Field is cool for the participants and I want UK to do well, but the marketing done for their competitions is just an exercise in frustration for someone that doesn’t consistently follow the sport. Here is a list of events for the championships that actually start on Thursday down in Knoxville. Um. Outside of that, all I got was that UK’s Rondel Sorrillo is awesome and just made SEC Male Runner of the Week. Other than that, I couldn’t find out much about who is participating and the like so I’ll just implore you to check out Ashley Muffett’s video blogs that recap significant events from the past season. I also may or may not be completely enamored with the incredibly charming Ke’Undra Bishop who opens the footage from the Virginia Tech meet back on February 11. A smile like that belongs on TV.

Saturday (5/15/10) –Men’s Tennis – NCAA Tournament Rounds 1 and 2 – Lexington, KY: You know, I have a boss at work that is just crazy about tennis. She goes to all the tennis events in Lexington and is so into it that she and her husband open their home to visiting athletes that can’t afford to stay in a hotel. I mention this because, by my exhaustive investigation into the one person that I work with, apparently Lexington is a tennis town and is hosting a portion of the first round of the NCAA Tournament. UK will play Cleveland State on May 15 at 1:00p. The winner of that contest will play the Georgia Tech-Binghamton winner on May 16 also at 1:00p. The Wildcats are #11 in the country and a #12 seed in the tournament. That seemed a little off for a 64 team tournament that looks just like the basketball bracket, but apparently they just straight seed the thing (meaning, there aren’t 4x #1 seeds, just one). Good luck to Coach Dennis Emery and the Wildcats against a Cleveland State team that won their conference tournament and will be ready to play.