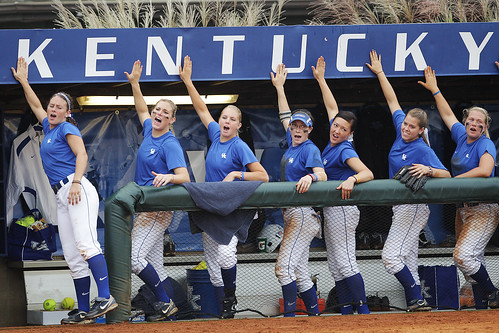 The sports schedule is always a little hectic. Pro basketball and hockey have entered the play-offs. Baseball has started. NASCAR is running strong. Horse racing is building toward the the second leg of the Triple Crown. Mondays are good days to plan out your week and make sure you don’t miss any of the UK-related action.

Monday (5/3/10) – Thursday (5/6/10) –Cram!: OK, so looking around at all the UK sports calendars has a whole lot of nothing for the first four days this week which leads me to assume it is dead week or finals week or something to that effect. It being the year 2010, one would think all one would have to do is to go to http://uky.edu and click on the link that says ‘Calendar’ to verify finals week. Being that UK is a learning institution that information being prominently displayed and easy to find is a safe bet, right? Nope. The only interesting thing I learned was that there were free cookies Sunday at Blazer and Commons. Maybe it is under the ‘Academics’ link? Strike Two. Well, surely I could type ‘finals week 2010’ in the search feature and find the dates? That has to be the first result surely. Swing and a miss and don’t call me Shirley. Wait. Fourth link down under the Dining Services schedule it shows May 3rd-7th as Finals Week. Thank you, Dining Services for not only providing meals to students (including free cookies) but being the only semi-prominent page on UK’s site to actually provide useful, timely information. Good luck to all the students and don’t forget to bring your blue books and spare pencils (They still use blue books, right? At some point they will just have iPads assigned to you and you submit your test via wireless connection, but we surely aren’t there yet. Not while tools like the prof in the video below take such offense to laptop use in his class. What a doof. Perchance the instructor would like to return to scrolls and inkwells?)

Friday (5/7/10) –Baseball – South Carolina at Kentucky – 7:00p: Here we go with some sports. The Baseball Team dropped an absolute heartbreaker against Louisville last week but looked to have turned things around against Tennessee with an opening game win. Unfortunately, the Cats dropped the last two and lost the series. After the finals break, the Wildcats will try to close out the rest of the season with some wins and that starts with beating the Gamecocks at home. South Carolina is no joke, though. They are ranked in the top 10 in the nation (USA Today #8, Collegiate Baseball #3, Rivals.com #6, Bufords Tobacco and Paint Can Weekly #9. . .too. . . many. . . polls) and lead Florida by one game for tops in the SEC. USC also just set stadium records for hits in a game while pounding Alabama to take that series in preparation for their Lexington roadtrip. The Cats have their work cut out for them as they look to win their first series since taking two from Alabama at the beginning of April.

Saturday (5/8/10) –Softball – Kentucky at Ole Miss (DH) – 2:00p: The UK Softball Team is going cross country (N-S, not E-W) for a stretch of away games. Last week, they dropped a couple of games in Ann Arbor to one of the best teams in the country (ranked #2, and one was a one run game so they held their own) and they now have to finish out the season in Mississippi. The Rebels are last in the SEC West in the standings and is sporting a .500 record overall. Should be an easy series for the Wildcats as they tune up for the conference tournament. This year, the tourney is being held in Fayetteville and it looks like the Cats are a lock to make the 8 team field as the 6 seed as long as they take care of business in Oxford.