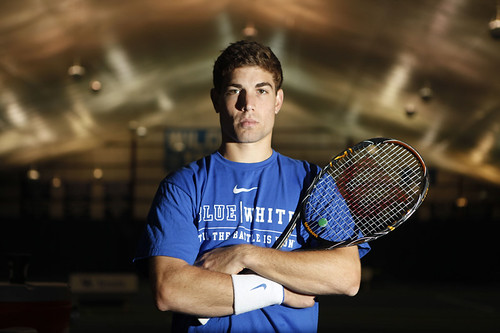 The sports schedule is a little hectic. Pro basketball and hockey has entered the play-offs. Baseball has started. NASCAR is running strong. Horse racing is building toward the Derby. Mondays are good days to plan out your week and make sure you don’t miss any of the UK-related action.

Monday (4/19/10) –NHL – Playoffs – 7:00-10:00p: Man, hockey is just plain weird. I was looking up the hockey schedules and they break down all the playoff series by letter. Does any other sport do that? I don’t ever remember baseball labeling Yanks/Sox with a letter (but if they did, I’d give it an F! Hey-ooo! I’ll be here all week). I tried to do all the research on all the UK alumni and/or Kentucky natives that have played in the NHL and came up with a grand total of zero. Surely, some dangler must have kicked out of, say, Owensboro once upon a time and fell into the NHL, right? Well, apparently not. I guess Skoal and skating just don’t mix. Let’s just move on.

Tuesday (4/20/10) –Baseball – Kentucky at Western Kentucky – 7:00p: UK (ranked #30) looks for revenge against a Hilltopper team that left Lexington with a 3 run win at the end of March. The Wildcats did well this past week against #7 Florida and kept the scores close. Unfortunately, they dropped their first two games but were able to salvage the series somewhat with a 6-5 win this past Saturday in Lexington. After the trip to Bowling Green, Big Blue heads to Auburn to take on the #23 ranked Tigers.

Wednesday (4/21/10) –Softball – Austin Peay at Kentucky DH – 5:00p: Oy. Florida teams can swing a stick. The men lost their series to the #7 Gators and on the softball side, the women had to take on Florida’s #3 ranked softball team. The results were similar as UK snagged at least one win in the 3 game series. The Governors (they will LEGISLATE your ass so hard. . .) aren’t all that great this year. As evidence, I submit Austin Peay’s recent performance against Patrick Barker’s Morehead Eagles where they failed to win a game. Should be an easy double header for the Wildcats as they look ahead to LSU at the end of the week.

Thursday (4/22/10) –NFL Draft – 7:30p: Aw yeah. For my money, the best non-sports yet sports-related event of the year is the NFL draft. I know it isn’t some people’s cup of tea, but I love it. Here are your Kentucky entrants in the draft: John Conner, Corey Peters, Trevard Lindley, Micah Johnson, Alfonso Smith, Sam Maxwell, Terrance Drake, and Zipp Duncan. Depending on what site you go to, there is either some late round interest in some UK players or none at all. No UK player is on Scouts Inc’s Top 32 list, Mel Kiper’s Top 25 Big Board, or Pat Kirwan’s 98 player mock draft (at nfl.com). I find this astounding. I would have bet money that Johnson and Lindley were at least second round locks 8-9 months ago. Currently, Peters and Conner are the highest rated Scouts Inc players with Conner holding a #2 position rank for fullbacks. He is the only one in single digits. They have Micah Johnson as the #13 ILB and Peters as #18 as a DT. Poor Lindley has gone from being considered one of the best CB’s in the nation to the #27 ranked CB in the draft. Considering what this group of players gave up by coming back this year, one can only hope their status improves significantly before Thursday night. Good luck, gentlemen.

Friday (4/23/10) –Men’s Tennis – SEC Championships – TBA: Wow. UK is hosting the SEC Championship right here in little old Lexatropolis and our Men’s Tennis Team is, like, really good. The Wildcats ended the season absolutely on fire with a 7 match win streak. Over the past 13 matches, your #8th ranked Wildcats have gone 12-1. The SEC boasts 4 of the top ten teams in the nation (led by #2 Tennessee) and 11 of the top 50 singles players. UK’s own Eric Quigley (Peewee Valley’s finest) is the #11 player in the nation and hopes to lead the Cats to victory. UK gets a bye in the first round that starts on Thursday and takes on the winner of Ole Miss/South Carolina at 3:00p.

Saturday (4/24/10) –Football – Blue/White Spring Game – 1:00p: Is there anything I can say about the upcoming spring game that hasn’t already been said? Just get out there and watch it. The Blue/White game is always fun and you will lose a lot less money than if you went to Keeneland. Currently, there is a 50% chance of rain, but I’ll get our boy Bill Meck on changing that around. He can do that, right?

Sunday (4/25/10) –NBA – Playoffs Round One Game Four – 1:00-9:30p: Most UK fans that I run across don’t start paying attention to the NBA until the Playoffs begin (heck, some don’t even pay attention until the Finals, if that). There are only 9 active UK players in the NBA (Azubuike, Bogans, Hayes, Magloire, Meeks, Mohammed, Morris, Prince, and Rondo) and over half of them are on teams that are in the Playoffs. Bogans is on the Spurs, Magloire the Heat, Mohammad the Bobcats, Morris the Hawks, and Rondo the Celtics. Rajon, Jamaal, and Keith will all see action on Sunday so tune in and root on your favorite former Cats.