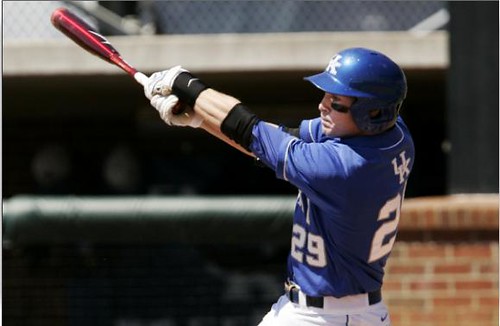 The sports schedule is a little hectic. Pro basketball is tilting towards the playoffs. Baseball has started. NASCAR is running strong. Golf tournaments are in full swing. Horse racing is building towards the Derby. Mondays are good days to plan out your week and make sure you don’t miss any of the UK-related action.

Tuesday (4/13/10) –Men’s Tennis – Lipscomb at Kentucky – 1:00p: The Men’s Tennis Team has been flat getting it done in April. They are 6-1 on the month after spanking Arkansas in Fayetteville on Sunday. The Cats follow up this game against Lipscomb (Motto? The Truth Shall Set You Free. I’ll give you some free truth. You can’t comb lips.) with a 6:00p contest against Centre. The Wildcats are currently ranked #11 in the nation and look to vault into the top ten with a good week against the Bisons and Colonels.

Wednesday (4/14/10) –Softball – Western Kentucky at Kentucky – 6:00p: Sophomore hurler Chandra Bell was filthy on Sunday as she fanned 10 batters and pitched a one-hit shutout to complete a sweep of South Carolina. The girls were due for a big series as they had been 3-7 since March 21st. The Hilltoppers are no joke this year and are 24-14 before taking on Murray State on Tuesday. Cool thing about this game is that afterwards, the UK Athletics staff will hold a home run derby with head coach Rachel Lawson playing the role of pitcher.

Friday (4/16/10) –Men’s Golf – SEC Championship – All Day: As we noted on Sunday (‘We’ being ‘me’, but I thought I would use the Will Leitch first person plural technique) the golf team finished fifth in the UK Invitational. Considering the size of the field (24 teams) and the fact that the Cats were only 4 shots behind the winner, Murray State, it wasn’t a bad run. UK hopes to parlay this strong showing into an equally impressive run in the SEC Championships down in Georgia. Good luck, fellas.

Saturday (4/17/10) –Baseball – Florida at Kentucky – 7:00p: The baseball team put the wood to Alabama over the weekend taking 2 of 3 from the #19 Crimson Tide. The loss on Sunday was a little deflating as the Wildcats were up 9-0 in the sixth before Alabama stepped on the gas and outscored the Cats 11-0 to snag the win. Florida is a huge challenge for the Cats as they are ranked #8 in the country and just took a series from Tennessee.