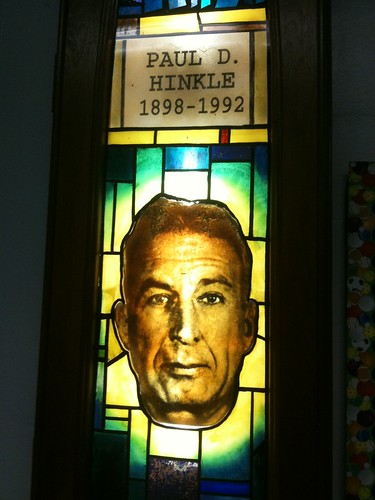 The sports schedule is a little hectic. Pro basketball is running strong. College basketball is wrapping up. NASCAR is coasting through another season. Golf tournaments are building towards the Masters and Tiger’s return. Mondays are good days to plan out your week and make sure you don’t miss any of the UK-related action.

Monday (4/5/10) –Men’s Basketball – NCAA Championship Game – CBS – 9:21: OK, this really doesn’t have much to do with UK sports, but it is safe to say that every UK fan has a rooting interest in this game, right? This is probably as close as most Big Blue fans will ever get to rooting for a team from Indiana considering the opponent and Lexingtonian Shelvin Mack. If Butler continues to play stellar defense (no team in the tournament has scored 60 points on the Bulldogs) then they have a shot at the Blue Devils. In a somewhat strange coincidence, I had the opportunity to travel to Indianapolis this year and watch a Butler game against Wright State. Hinkle Field House is a great venue to watch a game and if you ever have the opportunity to go see it, go for it (it is where Hoosiers was filmed). Hopefully, the ghost of Paul Hinkle will help pull the Bulldogs through and cast the Blue Devils back into Hades. Also? Coach K has lips so small he looks like a bird. Go Butler.

Tuesday (4/6/10) –Baseball – Louisville at Kentucky – 7:00p: The #30 ranked baseball team continues through a hot and cold stretch as they take on in-state rival Louisville. Last week, the Bat Cats beat Cincinnati on the road but lost to #18 Western Kentucky at home. After that, they won the opener of a 3 game series at #10 Arkansas, lost the second, then lost a heartbreaking rubbermatch 17-16 on a walk-off grand slam. Arkansas continued a streak of dominating the Cats in Fayetteville as the Cats haven’t won a series at Arkansas in 17 years. Even though the Cats are losing, they are playing tough competition, staying in games, and are rarely blown out. 7 of their 11 losses are by 4 runs or less. Louisville is ranked #7 in the country and will be another test during a brutal week for the Cats as they follow-up the Cards with a 3 game series against #23 Alabama starting on Friday.

Wednesday (4/7/10) –Softball – Kentucky at Louisville – 6:00p: The UK Softball Team started off April strong with a series win against Mississippi State and look to pound the Cardinals in the ‘ville. The Cardinals are ranked #25 in the nation and are coming off a series sweep of Providence. Apparently, the Cards are trying to beat every one of Pitino’s old coaching haunts. I’m pretty sure if they took on the Knicks at this point, it would be a pick ’em.

Friday (4/9/10) –Men’s Tennis – Kentucky at LSU – 3:00p: Hey hey. Your Men’s Tennis team is ranked #10 in the country. The Tigers so far this year are 5-11 and 2-5 in the SEC. Should be an easy game for the Wildcats and allow them to see all the cool sights in and around Baton Rouge. Wait. New Orleans is the fun place to be. What is Baton Rouge, like, the capital? Oh. Um. Have fun touring the Magnolia Mound, fellas.

Saturday (4/10/10) –Men’s Golf – UK Bluegrass Invitational – All Day: I looked all over for information on the UK Bluegrass Invitational, but I couldn’t find much. I assume everything will go well and our man Ben Fuqua (From? Danville) will open up a can on anybody that shows up. I mention UK’s tournament so that I can mention the BIG event that will be going on this weekend which is the Masters. This year, UK grad Steve Flesch and Kentucky native Kenny Perry will be participating. That’s right, no J.B. Holmes so root for Kenny or Steve in this one. As a total aside, I don’t find it surprising at all that Tiger cheated on his wife. I mean, Jordan cheated on his wife, right? And Tiger is the Jordan of golf. I think it would be much more shocking if Phil Mickelson cheated on his wife.

Sunday (4/11/10) –Women’s Golf – Gator Women’s Golf Invitational – All Day: Our Women’s Golf Team notched a third place finish in last week’s Anteater Open. The ladies are climbing the ladder and looking to polish their game as they approach the SEC Championships next week. For the gentlemen out there (I’m looking at you Drew Franklin), do yourself a favor and put former Florida golfer Sandra Gal into your Google machine. You can thank me later.